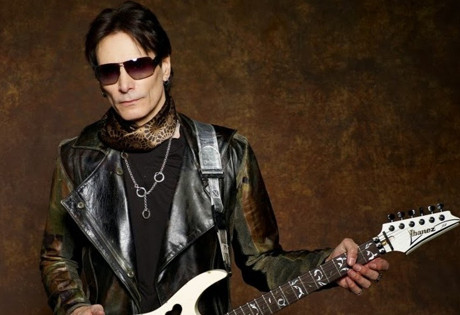 Start by filling out our no-obligation entertainment request form to check pricing and availability for Steve Vai or whoever else you may want.

Our Steve Vai agent will be happy to help you get Steve Vai's availability and booking fee, or the price and availability for any other A-List entertainer, band, comedian or celebrity you may want for your corporate event, private party, wedding, birthday party or public show.

The musician and producer Steve Vai was born in 1960 in New York. Long before Steve Vai rose to fame as one of America’s most notable guitarists, he grew up on Long Island, learning to play the guitar as a teenager. At the age of eighteen, Vai recorded his own guitar playing and sent it to Frank Zappa, who was so impressed that he hired him to transcribe a number of guitar solos.

The gig with Zappa eventually resulted in Steve Vai joining his band for a tour in 1980, and although Vai would only remain with Zappa’s band for two years, the early collaboration resulted in a life-long friendship and working relationship; Vai would go on to appear on many of Zappa’s albums long after he left the band in 1982. Notable appearances include 1993’s Zappa’s Universe, and in 2006 he joined Frank’s son, Dweezil, for the Zappa Plays Zappa tour.

After leaving Zappa’s band, Steve Vai moved to California to begin his career as a solo artist. Although he released a number of his own solo albums, Steve Vai became known for his work as a member of other notable bands in the 1980’s and 1990’s. In 1985, Vai joined David Lee Roth’s post-Van Halen band, Eat ‘em and Smile Band. In 1989, Vai replaced Vivian Campbell as the guitarist for the band Whitesnake. During this time, Steve Vai continued to tour and perform with his own band as well, starting with Flex-Able in 1984, and including: Passion and Warfare (1990), Sex & Religion (1993), Fire Garden (1996), Flex-Able Leftovers (1998), The Ultra Zone (1999), and Real Illusions: Reflections (2005.)

Collectively, Steve Vai has sold more than fifteen million albums throughout his solo career, earning three Grammy Awards. Vai’s most recent solo album is The Story of Light, which arrived in 2012.

For more information on booking Steve Vai, please contact Booking Entertainment. One of our top booking agents will be happy to work on your behalf to get you the best possible price to book any big name entertainer for your upcoming public, private or corporate event worldwide.

Booking Entertainment works to get the best possible Steve Vai booking fee and Steve Vai price for our clients while also providing the celebrity or famous entertainer with the level of professionalism and industry norms that they expect from an event run by a professional booking agency and production management.

Booking Entertainment uses our agency / management relationships and over 25 years of production experience to help buyers of headline / top name entertainers and does not claim or represent itself as the exclusive Steve Vai agent, manager or management company for any of the artists on our site.

Booking Entertainment does not claim or represent itself as the exclusive booking agency, business manager, publicist, speakers bureau or management for Steve Vai or any artists or celebrities on this website.