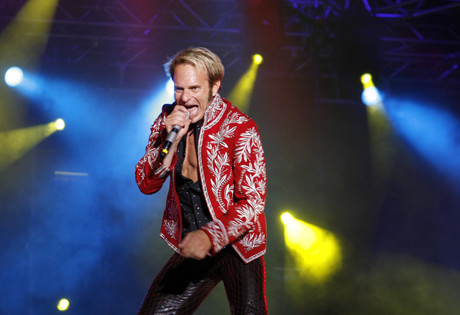 Start by filling out our no-obligation entertainment request form to check pricing and availability for David Lee Roth or whoever else you may want.

Our David Lee Roth agent will be happy to help you get David Lee Roth's availability and booking fee, or the price and availability for any other A-List entertainer, band, comedian or celebrity you may want for your corporate event, private party, wedding, birthday party or public show.

The American songwriter and musician David Lee Roth was born in 1954 in Bloomington, Indiana but spent his formative years in California. Roth grew up in an affluent household, as his father was a renowned eye surgeon whose investments in real estate resulted in a sizable family fortune. Despite the fact that most of his family members were surgeons or other medical professionals, young David found himself drawn to the entertainment industry, and by the time he was in his teens, he was performing as a solo singer and sometimes with various other groups.

After teaming up with Eddie Van Halen and Alex Van Halen, Roth became part of the trio at that time called Mammoth. In 1974, the band switched its name to Van Halen, and the group began to perform around the Los Angeles area, slowly establishing a growing fan base. A meeting with Gene Simmons of the rock group KISS in 1976 led to an offer of assistance on Van Halen’s first demo tape, which eventually garnered the attention of a Warner Brothers’ executive in 1977.

After signing with Warner Brothers, the band released their self-titled debut album in 1978. Van Halen was a smash hit, rising to the top of the charts and selling more than twelve million copies over time. Throughout the early 1980’s, David Lee Roth served as the band’s front-man, bringing hits such as “Pretty Woman,” “Dancing in the Street,” “Secrets,” “So This Is Love?,” “Jump,” and “Hot for Teacher” to the mainstream. Roth remained with Van Halen through the albums Van Halen II (1979), Women and Children First (1980), Fair Warning (1982), Diver Down (1982) and 1984 (1984), after which time he left the band to launch a solo career.

David Lee Roth’s debut solo album, Crazy from the Heat, was also an enormous hit upon its release in 1985, and featured such light-hearted songs such as “Just a Gigolo/I Ain’t Got Nobody” and “California Girls.” From 1985 to 2006, Roth performed mainly with his own solo band, featuring notable musicians such as Billy Sheehan and Steve Vai. Crazy from the Heat was followed by: Eat ‘Em and Smile (1986), Skyscraper (1988), A Little Ain’t Enough (1991), Your Filthy Little Mouth (1994), DLR Band (1998), and Diamond Dave (2003.) The albums gave audiences the additional hits: “Yankee Rose,” “That’s Life,” “Tobacco Road,” and “Just Like Paradise,” to name a few.

In 2007, David Lee Roth rejoined Van Halen, and has remained with the band ever since. The group released a “comeback” album, A Different Kind of Truth, in 2012, featuring the songs “She’s the Woman” and “Tattoo.” In 2015, the group released a live album, Tokyo Dome Live in Concert.

For more information on booking David Lee Roth, please contact Booking Entertainment. One of our top booking agents will be happy to work on your behalf to get you the best possible price to book any big name entertainer for your upcoming public, private or corporate event worldwide.

Booking Entertainment works to get the best possible David Lee Roth booking fee and David Lee Roth price for our clients while also providing the celebrity or famous entertainer with the level of professionalism and industry norms that they expect from an event run by a professional booking agency and production management.

Booking Entertainment uses our agency / management relationships and over 25 years of production experience to help buyers of headline / top name entertainers and does not claim or represent itself as the exclusive David Lee Roth agent, manager or management company for any of the artists on our site.

Booking Entertainment does not claim or represent itself as the exclusive booking agency, business manager, publicist, speakers bureau or management for David Lee Roth or any artists or celebrities on this website.