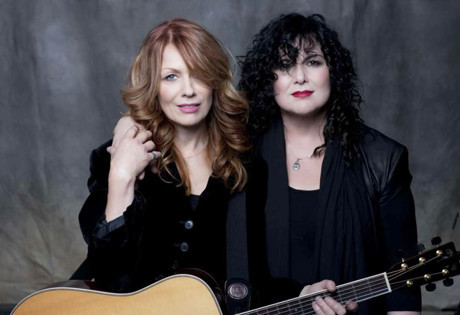 Start by filling out our no-obligation entertainment request form to check pricing and availability for Heart or whoever else you may want.

Our Heart agent will be happy to help you get Heart's availability and booking fee, or the price and availability for any other A-List entertainer, band, comedian or celebrity you may want for your corporate event, private party, wedding, birthday party or public show.

In the early 1960’s, the band which would become Heart was formed by Roger and Mike Fisher and Steve Fossen. But it wasn’t until Ann and Nancy Wilson, the sisters who would become synonymous with the band, jumped on board in 1970 that Heart truly found success. Heart’s debut album, Dreamboat Annie, hit record stores in 1975 and on the strength of two hits singles, “Magic Man” and “Crazy on You,” quickly achieved platinum status. Little Queen followed in 1997, launching the iconic single, “Barracuda.”

Throughout most of the 1990’s, Heart enjoyed a hiatus, and both Nancy and Ann Wilson began independent endeavors. Nancy Wilson released her first solo album in 1999 (Live at McCabe’s Guitar Shop) and wrote the score to Almost Famous, directed by her husband Cameron Crowe. Her sister, Ann Wilson participated in the “Walk Down Abbey Road: A Tribute to the Beatles” tour in 2001. Three years later, in 2004, Heart released their first studio album in eleven years, and Jupiter’s Darling hit the charts. Hope & Glory, Ann Wilson’s first solo album, followed in 2007. Since that time, the duo has released the additional albums Strange Euphoria (2012), Fanatic (2012), Fanatic Live from Caesar’s Colosseum (2014), and Beautifully Broken (2016.)

Today, Heart’s innumerous accomplishments include ranking on VH1’s “100 Greatest Artists of Hard Rock” and record sales topping thirty million worldwide. The duo was inducted into the Rock and Roll Hall of Fame in 2013, and released their autobiography, Kicking and Dreaming: A Story of Heart, Soul, and Rock and Roll, around the same time. Heart is currently on hiatus, but both Nancy and Ann embarked on solo endeavors in 2017.

For more information on booking Heart, please contact Booking Entertainment. One of our top booking agents will be happy to work on your behalf to get you the best possible price to book any big name entertainer for your upcoming public, private or corporate event worldwide.

Booking Entertainment works to get the best possible Heart booking fee and Heart price for our clients while also providing the celebrity or famous entertainer with the level of professionalism and industry norms that they expect from an event run by a professional booking agency and production management.

Booking Entertainment uses our agency / management relationships and over 25 years of production experience to help buyers of headline / top name entertainers and does not claim or represent itself as the exclusive Heart agent, manager or management company for any of the artists on our site.

Booking Entertainment does not claim or represent itself as the exclusive booking agency, business manager, publicist, speakers bureau or management for Heart or any artists or celebrities on this website.