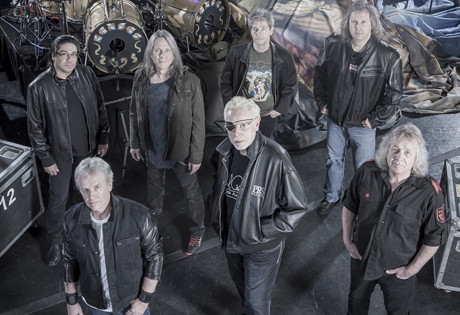 Start by filling out our no-obligation entertainment request form to check pricing and availability for Kansas or whoever else you may want.

Our Kansas agent will be happy to help you get Kansas's availability and booking fee, or the price and availability for any other A-List entertainer, band, comedian or celebrity you may want for your corporate event, private party, wedding, birthday party or public show.

The American band known as Kansas was established by founding members Phil Ehart, Kerry Livgren, Robbie Steinhardt, Richard Williams, Steve Walsh, and Dave Hope in the early 1970’s. The group’s first two albums, Kansas (1794) and Masque (1975) were met with moderate success, but it was 1976’s Leftoverture that rocketed the group Kansas to fame.

Kansas featured the iconic hit single “Carry On Wayward Son" and exceeded sales of three million copies. Point of Know Return (1977) was an even greater hit, with the single “Dust in the Wind.” “Dust in the Wind” went on to reach into the top ten of the charts, selling over a million copies and reaching into gold status. With its now signature guitar line, the song is one of Kansas’ first acoustic pieces, and the eternal theme of mortality has made it an everlasting and enduring piece for more than thirty years.

Kansas followed up this remarkable success with Two for the Show and Monolith, released in the following year, but by the time Kansas moved into the 1980’s, personal changes in the band members had affected the lineup. Walsh quit, to be replaced by John Elefante, and the band released Vinyl Confessions in 1982. Drastic Measures came next in 1983, and then Kansas took a hiatus for three years to regroup.

Kansas resurfaced in 1986, retaining Ehart, Williams, and Walsh and adding Billy Greer and Steve Morse to the lineup. The album Power proved successful, launching the single “All I Wanted,” which hit the top twenty on the charts. In the Spirit of Things followed in 1988, but was seven years before Freaks of Nature and then Always Never the Same (1998.)

In the new millennium, Kansas continues to write, record, and tour with the current lineup of Ehart, Williams, Billy Greer, David Ragsdale, Ronnie Platt, David Manion, and Zak Rizvi. Between 2000 and 2010 the band released the albums Somewhere to Elsewhere (2000), The Other Side (2005), and Works in Progress (2006.) In 2012, Kansas joined other notable bands such as Creedence Clearwater Revisited and Blue Oyster Cult on the Rock Legends II cruise aboard Royal Caribbean. In 2016, Kansas released their first studio album in nearly a decade—The Prelude Implicit. The release kicked off an extensive 40th anniversary tour which lasted into the fall of 2017.

For more information on booking Kansas, please contact Booking Entertainment. One of our top booking agents will be happy to work on your behalf to get you the best possible price to book any big name entertainer for your upcoming public, private or corporate event worldwide.

Booking Entertainment works to get the best possible Kansas booking fee and Kansas price for our clients while also providing the celebrity or famous entertainer with the level of professionalism and industry norms that they expect from an event run by a professional booking agency and production management.

Booking Entertainment uses our agency / management relationships and over 25 years of production experience to help buyers of headline / top name entertainers and does not claim or represent itself as the exclusive Kansas agent, manager or management company for any of the artists on our site.

Booking Entertainment does not claim or represent itself as the exclusive booking agency, business manager, publicist, speakers bureau or management for Kansas or any artists or celebrities on this website.