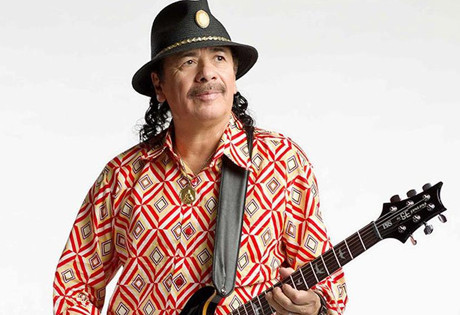 Start by filling out our no-obligation entertainment request form to check pricing and availability for Santana or whoever else you may want.

Our Santana agent will be happy to help you get Santana's availability and booking fee, or the price and availability for any other A-List entertainer, band, comedian or celebrity you may want for your corporate event, private party, wedding, birthday party or public show.

Carlos Santana was born in 1947 in Mexico. His father was a mariachi player, and so the young Carlos began following in his father’s footsteps, learning the violin as a child. By the time he was eight, he began guitar lessons, and when the family moved to Tijuana, he began performing in local bars. In the early 1960’s, the Santana family moved to San Francisco, and Carlos finished out his high school education there.

Carlos Santana founded the Santana Blues Band in 1966, alongside fellow musicians Gregg Rolie (keyboards and vocals), Michael Shrieve (drums), David Brown (bass), Jose "Chepito" Areas (percussion), and Michael Carabello (percussion). They eventually changed the name to simply Santana, and debuted in 1968 at the Fillmore. Immediately following, they found themselves with a recording contract and a self-titled debut album, which rocketed to the top of the charts after their performance at the Woodstock Festival in 1969.

Abraxas followed in 1970, and then Santana III in 1971. Shortly thereafter, the group members went their separate ways, although Carlos Santana continued the band, releasing a live performance recording in 1972. Caravanserai followed in the same year, and then Love Devotion Surrender in 1973, an album recorded as a duo with John McLaughlin. The album went gold, and Carlos Santana continued with additional releases throughout the remainder of the decade: Borboletta (1974), Amigos (1975), Festival (1976), Moonflower (1977), and Inner Secrets (1978.)

Carlos Santana released his first genuine solo album in 1979, Oneness/Silver Dreams – Golden Reality.  Havana Moon came next in 1983, which reached into the Top 40, and in 1986 Santana accepted a role as composer for the film La Bamba, based on the life of Ritchie Valens. Blues for Salvador came next in 1987, and the title track earned Santana a Grammy for Best Rock Instrumental Performance. Dancing in the Flesh came in 1990, and Carlos Santana continued to record both with the band Santana and as a solo artist for the rest of the decade.

Supernatural as released in 1999, and went on to become one of Carlos Santana’s greatest achievements, selling over fifteen million copies and earning Santana nine Grammys, including Album and Record of the Year. The single “Smooth” became an extraordinarily successful hit, and paved the way for Shaman, which Santana released in 2002.  It too was successful, although not the blockbuster its predecessor was, and produced “The Game of Love” (with Michelle Branch), which went on to win a Grammy for best Pop Collaboration with vocals.

In the latter part of the millennium’s first decade, Carlos Santana contributed to: 90 Millas, Gloria Estefan’s album; “Into the Night,” with Chad Kroeger; and Marcelo Vieira’s Acoustic Sounds, with Marcelo Vieira.  Santana continues to tour and perform, with recent notable appearances having taken place at the Athens Olympic Stadium, the Philip II Stadium in Skopje, Macedonia, and the Hard Rock Hotel in Las Vegas. In addition, he has recently opened Maria Maria, a chain of upscale Mexican restaurants with locations in Florida, Texas, and California.

For more information on booking Santana, please contact Booking Entertainment. One of our top booking agents will be happy to work on your behalf to get you the best possible price to book any big name entertainer for your upcoming public, private or corporate event worldwide.

Booking Entertainment works to get the best possible Santana booking fee and Santana price for our clients while also providing the celebrity or famous entertainer with the level of professionalism and industry norms that they expect from an event run by a professional booking agency and production management.

Booking Entertainment uses our agency / management relationships and over 25 years of production experience to help buyers of headline / top name entertainers and does not claim or represent itself as the exclusive Santana agent, manager or management company for any of the artists on our site.

Booking Entertainment does not claim or represent itself as the exclusive booking agency, business manager, publicist, speakers bureau or management for Santana or any artists or celebrities on this website.