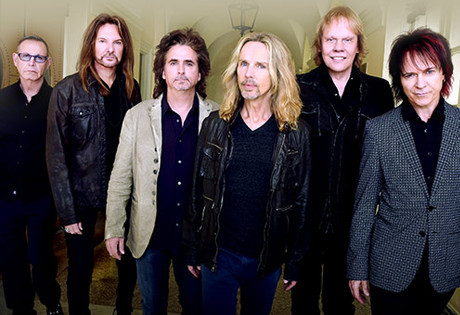 Start by filling out our no-obligation entertainment request form to check pricing and availability for Styx or whoever else you may want.

Wondering how to book Styx for your event? Let Booking Entertainment be Your entertainment booking agency for booking Styx for events worldwide.

Our Styx agent will be happy to help you get Styx's availability and booking fee, or the price and availability for any other A-List entertainer, band, comedian or celebrity you may want for your corporate event, private party, wedding, birthday party or public show.

Styx’s ability to create enduring, chart-topping hits has been undeniable. Singles such as “Come Sail Away” and “Babe’ are nearly iconic for the decades in which they became hits. But long before their rise to fame, the group was formed when brothers John Panozzo and Chuck Panozzo met up with Dennis DeYoung in 1961. Initially called The Tradewinds, the band would become complete with the addition of James Young in 1970, and in the following year they would adopt the name Styx, inspired by the mythological Greek river.

With influences from the Moody Blues and Emerson, Lake, and Palmer, Styx very first self-titled album in 1972 would prove itself indicative of a noteworthy career. Sytx II followed in 1973, and the decade would bring a string of albums from the band, all of which charted high. The Serpent is Rising (1974), Man of Miracles (1975), Crystal Ball (1976), The Grand Illusion (1977), Pieces of Eight (1978) and Cornerstone (1979) would bring enduring hits such as “Renegade,” “Blue Collar Man,” “Fooling Yourself,” and the iconic “Babe” and “Come Sail Away.”

Paradise Theater was released in 1981 to sell over three million copies and become their biggest hit. “Mr. Roboto” sprung from 1983’s Kilroy was Here, and Caught in the Act in 1984 rounded out an impressive period of success for the band.  A new studio album, Edge of the Century, with it’s power ballad “Show Me the Way” was released in 1990, and after a hiatus, Styx entered the new millennium in 1999 with Brave New World and Styx World: Live 2001, released in 2001.Cyclorama was released in 2003, and Big Bang Theory followed in 2005. The latter was Styx’s highest charting album in fourteen years, reaching number forty-six on the Billboard’s Top 200.

In recent years, Styx has joined forces with a number of other high-profile rock bands for annual or semi-annual tours. In 2010, Styx joined Def Leppard and Foreigner on a 50-day tour, and in the following year, the band played a North American tour with Boston. The years 2009 saw Styx on tour with REO Speedwagon and .38 Special, and then between 2014 and 2015 the group toured alongside Foreigner, Don Felder, Def Leppard, and Tesla for a variety of tours.

In total, Styx has sold over seventeen million records. The band continues to tour and perform with the current lineup of Chuck Panozzo, James Young, Tommy Shaw, Todd Sucherman, Lawrence Gowan, and Ricky Phillips. Styx’s latest album, The Mission, was released in the summer of 2017.

For more information on booking Styx, please contact Booking Entertainment. One of our top booking agents will be happy to work on your behalf to get you the best possible price to book any big name entertainer for your upcoming public, private or corporate event worldwide.

Booking Entertainment works to get the best possible Styx booking fee and Styx price for our clients while also providing the celebrity or famous entertainer with the level of professionalism and industry norms that they expect from an event run by a professional booking agency and production management.

Booking Entertainment uses our agency / management relationships and over 25 years of production experience to help buyers of headline / top name entertainers and does not claim or represent itself as the exclusive Styx agent, manager or management company for any of the artists on our site.

Booking Entertainment does not claim or represent itself as the exclusive booking agency, business manager, publicist, speakers bureau or management for Styx or any artists or celebrities on this website.