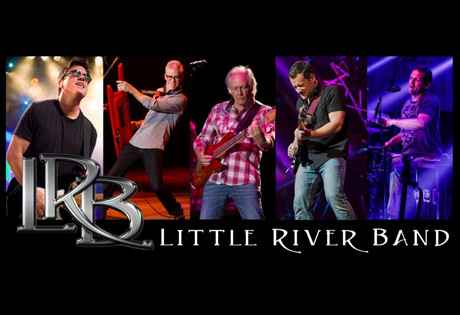 Start by filling out our no-obligation entertainment request form to check pricing and availability for Little River Band or whoever else you may want.

Our Little River Band agent will be happy to help you get Little River Band's availability and booking fee, or the price and availability for any other A-List entertainer, band, comedian or celebrity you may want for your corporate event, private party, wedding, birthday party or public show.

Little River Band was formed in Melbourne, Australia, in 1975, when original band members Graeham Goble, Glenn Shorrock, Roger McLachlan, Ric Formosa, and Derek Pellicci came together and hit the charts immediately in their home country. A lucky meeting with their future manager, Glenn Wheatley, who had experience with many successful British bands, led to a strong start in the United States. Little River Band released their first single in the US, “It’s a Long Way There,” and it immediately rose into the top of the charts. Their self-titled debut dropped in 1976, and by 1982, they’d earned the distinction of becoming the only act to enjoy a single in the Top Ten on the US charts for six straight years.

A string of albums followed over the years, including: After Hours (1976), Diamantina Cocktail (1977), Sleeper Catcher (1978), First Under the Wire (1979), Time Exposure (1981), Playing to Win (1984), Monsoon (1988), Get Lucky (1990), and I Dream Alone (1997.) Little River Band became known for its extensive touring schedule, headlining shows across the nation and touring with other successful bands such as America, the Eagles, and the Doobie Brothers. Changes in the lineup occurred periodically, but as of the dawn of the new millennium, a stable lineup lasted for three albums: Where We Started From (2000), One Night in Mississippi (2002), and Test of Time (2004.) By the end of 2004, however, another changeup occurred, by Little River Band moved forward with the current lineup of Wayne Nelson, Chris Marion, Greg Hind, Ryan Ricks, and Rich Herring.

For more information on booking Little River Band, please contact Booking Entertainment. One of our top booking agents will be happy to work on your behalf to get you the best possible price to book any big name entertainer for your upcoming public, private or corporate event worldwide.

Booking Entertainment works to get the best possible Little River Band booking fee and Little River Band price for our clients while also providing the celebrity or famous entertainer with the level of professionalism and industry norms that they expect from an event run by a professional booking agency and production management.

Booking Entertainment uses our agency / management relationships and over 25 years of production experience to help buyers of headline / top name entertainers and does not claim or represent itself as the exclusive Little River Band agent, manager or management company for any of the artists on our site.

Booking Entertainment does not claim or represent itself as the exclusive booking agency, business manager, publicist, speakers bureau or management for Little River Band or any artists or celebrities on this website.