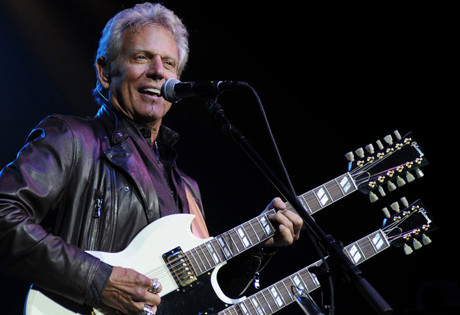 Start by filling out our no-obligation entertainment request form to check pricing and availability for Don Felder or whoever else you may want.

Our Don Felder agent will be happy to help you get Don Felder's availability and booking fee, or the price and availability for any other A-List entertainer, band, comedian or celebrity you may want for your corporate event, private party, wedding, birthday party or public show.

Don Felder was born in 1947 in Gainesville, Florida. As a child, he was fascinated with music and enjoyed watching musicians perform on the Ed Sullivan Show. He started playing guitar when he was ten years old, and five years later, he began his first band alongside Bernie Leadon, future member of the Eagles. The band eventually broke up, though, and Felder moved to the northeast. He eventually settled in Boston, where he began working at a recording studio. He reconnected with Leadon and met the other members of the Eagles, who eventually invited him to add some slide guitar tracks to “Good Day in Hell.”

In 1974, Felder joined the band for good, and remained with the Eagles off and on until 2001. As a member of the band, Don Felder played guitar, co-write songs (including “Hotel California”) and even sang vocals on “Visions,” a song he co-wrote with Don Henley.  Felder is ultimately credited with shifting the Eagles sound from country-oriented to rock-oriented, and throughout his career with the band he contributed to such iconic songs as: "Hotel California", "Life In The Fast Lane", "One Of These Nights", and "New Kid In Town.”

Following his years with the Eagles, Don Felder contributed music for television and film, including songs for Fast Times at Ridgemont High, Secret Admirer, Galaxy High, and Nice Dreams. He ha also worked with such notable musician as The Bee Gees, Joe Walsh, Michael Jackson, Alice Cooper, David Foster, Tom Petty, Warren Zevon, Stevie Nicks, Don Henley, Elton John, and Barbra Streisand. He was inducted into the Rock and Roll Hall of Fame in 1998, and in the new millennium, Don Felder published a bestseller, “Heaven and Hell,” chronicling his life with the Eagles.

In the fall of 2012, Don Felder delighted his fans with the release of Road to Forever, his first album in almost three decades.  He continues to write, record, and perform.

For more information on booking Don Felder, please contact Booking Entertainment. One of our top booking agents will be happy to work on your behalf to get you the best possible price to book any big name entertainer for your upcoming public, private or corporate event worldwide.

Booking Entertainment works to get the best possible Don Felder booking fee and Don Felder price for our clients while also providing the celebrity or famous entertainer with the level of professionalism and industry norms that they expect from an event run by a professional booking agency and production management.

Booking Entertainment uses our agency / management relationships and over 25 years of production experience to help buyers of headline / top name entertainers and does not claim or represent itself as the exclusive Don Felder agent, manager or management company for any of the artists on our site.

Booking Entertainment does not claim or represent itself as the exclusive booking agency, business manager, publicist, speakers bureau or management for Don Felder or any artists or celebrities on this website.