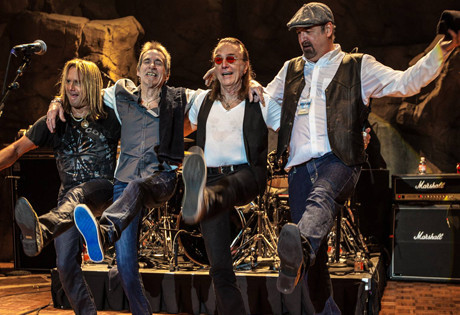 Start by filling out our no-obligation entertainment request form to check pricing and availability for Foghat or whoever else you may want.

Our Foghat agent will be happy to help you get Foghat's availability and booking fee, or the price and availability for any other A-List entertainer, band, comedian or celebrity you may want for your corporate event, private party, wedding, birthday party or public show.

Foghat came together in the 1970’s in Britain, when Savoy Brown members Dave Peverett, Tony Stevens, and Roger Earl left the group to form their own. They joined forces with guitarist Rod Price and moved to the United States, and released their debut album in 1972. Foghat became an instant hit, spawning the hit single "I Just Want to Make Love to You,” and the band seemed destined for success.

The group named their second album also Foghat, distinguishing it from its predecessor only by the album cover. The second Foghat album was an even greater success than the first, rising to gold status and establishing Foghat as one of the most popular arena acts of the decade. For the remainder of the 1970’s, the band released hit album after hit album: Energized (1974), Rock and Roll Outlaws (1974), Fool for the City (1975), Night Shift (1976), Foghat Live (1977), and Stone Blue (1978.)

Foghat’s success began to decline in the 1980’s, and the group disbanded in 1984. They reunited in 1993 and began touring again, releasing two additional albums: Boogie Men (1994) and Road Cases (1998.) Even after the loss of Peverett due to cancer, Foghat added Charlie Huhn on vocals and released the album Family Joules in 2002. Foghat has continued to tour well into the new millennium with the lineup of Roger Earl, Bryan Bassett, and Charlie Huhn. The band has recently released a string of new albums: Under the Influence (2016), Live at the Belly Up (2017), and Slow Ride (2018.)

For more information on booking Foghat, please contact Booking Entertainment. One of our top booking agents will be happy to work on your behalf to get you the best possible price to book any big name entertainer for your upcoming public, private or corporate event worldwide.

Booking Entertainment works to get the best possible Foghat booking fee and Foghat price for our clients while also providing the celebrity or famous entertainer with the level of professionalism and industry norms that they expect from an event run by a professional booking agency and production management.

Booking Entertainment uses our agency / management relationships and over 25 years of production experience to help buyers of headline / top name entertainers and does not claim or represent itself as the exclusive Foghat agent, manager or management company for any of the artists on our site.

Booking Entertainment does not claim or represent itself as the exclusive booking agency, business manager, publicist, speakers bureau or management for Foghat or any artists or celebrities on this website.