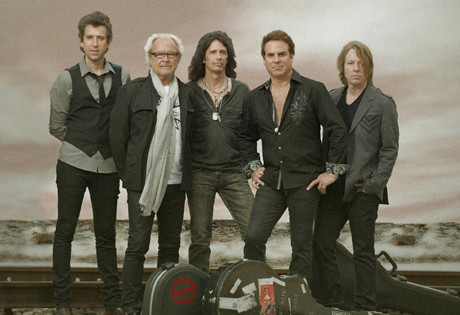 Start by filling out our no-obligation entertainment request form to check pricing and availability for Foreigner or whoever else you may want.

Our Foreigner agent will be happy to help you get Foreigner's availability and booking fee, or the price and availability for any other A-List entertainer, band, comedian or celebrity you may want for your corporate event, private party, wedding, birthday party or public show.

With iconic hits such as "Hot Blooded" and "Feels Like the First Time," Foreigner is perhaps one of the most successful classic rock bands in the history of music.

Foreigner, with members Ian McDonald, Mick Jones, and Lou Gramm, burst onto the scene in 1976 with Foreigner, and within a year they were recognized by Rolling Stone Magazine as a top new artist. The album climbed to number four on the Billboard charts on the strength of those first hits, and subsequent hits such as "Cold as Ice," "Double Vision," and the chart-topping "Waiting for a Girl Like You." .

1984's "I Want to Know What Love Is" rocketed Foreigner to staggering commercial success, though. The single topped the charts worldwide and featured the unique, heart-stopping inclusion of the New Jersey Mass Choir to back the band. Agent Provocateur subsequently topped the UK album charts and reached number four in America.

Inside Information released in 1988, spawned the Foreigner hits "Say You Will" and "I Don't Want To Live Without You." After a brief hiatus, Foreigner returned in 1995 with a tour to promote Mr. Moonlight.

In 1999, Gramm was treated for a brain tumor, but only three years later, in 2002, the band reunited for a 25th anniversary tour. Three years later a new Foreigner line-up was announced, with the additions of Kelly Hansen, Jeff Pilson, and Jason Bonham. Foreigner joined Styx and Def Leppard on tour in 2007, and that same year they joined Bill Wyman, Pete Townshend, and Paolo Nutini as openers for the Led Zeppelin reunion show, a unique one-night event.

Foreigner released No End in Sight: The Very Best of Foreigner in 2008. The anthology included all of their greatest hits plus some new live recordings and a new studio track, "Too Late", which was their first new song release since 1994's Mr. Moonlight, and the first recorded output of the new lineup.

Can't Slow Down followed in 2009, and in 2010 Foreigner teamed up with Styx again, and Kansas, for another tour. They joined Journey on their UK tour in 2011, and they continue to tour small clubs and venues.

For more information on booking Foreigner, please contact Booking Entertainment. One of our top booking agents will be happy to work on your behalf to get you the best possible price to book any big name entertainer for your upcoming public, private or corporate event worldwide.

Booking Entertainment works to get the best possible Foreigner booking fee and Foreigner price for our clients while also providing the celebrity or famous entertainer with the level of professionalism and industry norms that they expect from an event run by a professional booking agency and production management.

Booking Entertainment uses our agency / management relationships and over 25 years of production experience to help buyers of headline / top name entertainers and does not claim or represent itself as the exclusive Foreigner agent, manager or management company for any of the artists on our site.

Booking Entertainment does not claim or represent itself as the exclusive booking agency, business manager, publicist, speakers bureau or management for Foreigner or any artists or celebrities on this website.