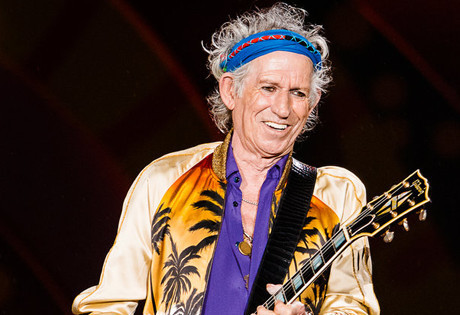 Start by filling out our no-obligation entertainment request form to check pricing and availability for Keith Richards or whoever else you may want.

Our Keith Richards agent will be happy to help you get Keith Richards's availability and booking fee, or the price and availability for any other A-List entertainer, band, comedian or celebrity you may want for your corporate event, private party, wedding, birthday party or public show.

Legendary musician Keith Richards was born in 1943 in Kent, a suburb of London. He and Mick Jagger met while still in primary school, although it was for the moment a brief meeting, and the two would not reunite until they reached adulthood. As a child, Richards began playing guitar, and following his expulsion from school in 1959, Keith’s headmaster recommended that he try Sidcup Art School. It was there that Keith Richards met Dick Taylor, who was playing with Mick Jagger in a band. It was a fortuitous turn of events which led to the formation of what would become the Rolling Stones.

The Rolling Stones debuted in the summer of 1962, and by 1965 they’d become near superstars. Hits like “(I Can't Get No) Satisfaction" brought them across the ocean to enormous success in the United States. By the 1970’s, the band was facing not only a staggering level of stardom, but also a frightening level of excess and drug addiction. Throughout the middle part of this decade, Keith Richards struggled with his personal demons and very little productive music was recorded.

As an artist, Keith Richards is recognized as among the greatest rhythm guitarists in music history, having crafted some of the most unforgettable riffs in the annals of rock and roll. He is among the most enduring figures in American music history and much to the surprise of everyone, is still going strong. His latest album, Crosseyed Heart—his third as a solo artist—was released in September of 2015.

For more information on booking Keith Richards, please contact Booking Entertainment. One of our top booking agents will be happy to work on your behalf to get you the best possible price to book any big name entertainer for your upcoming public, private or corporate event worldwide.

Booking Entertainment works to get the best possible Keith Richards booking fee and Keith Richards price for our clients while also providing the celebrity or famous entertainer with the level of professionalism and industry norms that they expect from an event run by a professional booking agency and production management.

Booking Entertainment uses our agency / management relationships and over 25 years of production experience to help buyers of headline / top name entertainers and does not claim or represent itself as the exclusive Keith Richards agent, manager or management company for any of the artists on our site.

Booking Entertainment does not claim or represent itself as the exclusive booking agency, business manager, publicist, speakers bureau or management for Keith Richards or any artists or celebrities on this website.