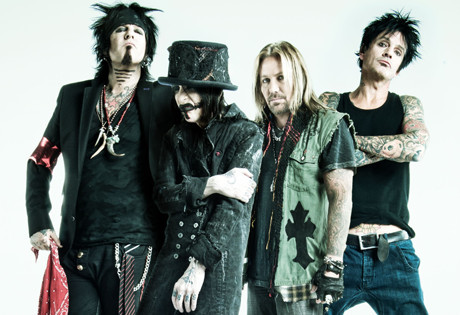 Start by filling out our no-obligation entertainment request form to check pricing and availability for Motley Crue or whoever else you may want.

Our Motley Crue agent will be happy to help you get Motley Crue's availability and booking fee, or the price and availability for any other A-List entertainer, band, comedian or celebrity you may want for your corporate event, private party, wedding, birthday party or public show.

Motley Crue began in 1981, when Nikki Sixx and Tommy Lee joined forces with Mick Mars and Vince Neil.  A lucky meeting with Allan Coffman led to the financing and release of their debut, Too Fast for Love, which sold more than 20,000 copies. The success of the first album led to a deal with Elektra Records, and Shout at the Devil came next in 1983, featuring the single “Looks that Kill,” which launched Motley Crue as a formidable force on the MTV-driven music scene evolving in the early 1980’s.

Theater of Pain came next, spawning “Smokin’ in the Boys’ Room,” Motley Crue’s first Top 40 hit. The single “Home Sweet Home” became among the first rock ballads to air on MTV, and the success paved the way for Girls Girls Girls in 1986.  Motley Crue’s rocket to success was temporarily halted when a drug overdose nearly took the life of Nikki Sixx. The entire Motley Crue lineup entered rehab and returned clean in 1989, releasing Dr. Feelgood and launching some of their most successful and iconic singles to date: "Kickstart My Heart," "Without You," "Don't Go Away Mad (Just Go Away)," and “Dr. Feelgood.” The band embarked on a worldwide tour before releasing Decade of Decadence, their first compilation album, in 1991. ????

In the years following, Motley Crue experienced a blend of highs and lows, with the creation of their own record label and new multi-million dollar contracts tempered by unrest within the group and the firing of Vince Neil in 1992.
But the new lineup, with John Corabi as a replacement, released the album Motley Crue (1994), and the album went gold in the United States. Corabi eventually left the band, and Neil returned, just in time for Generation Swine in 1997. The album did not perform as Motley Crue had hoped, however, and more unrest in the band led to the departure of Lee, who formed his own band (Methods of Mayhem) in 1999.

Motley Crue moved forward with New Tattoo, released at the dawn of the new millennium, and published the best-selling biography, The Dirt, in 2001. In the new millennium, some band members embarked on solo endeavors, some members left and other resturned, and both Neil and Lee participated in reality shows. But by 2005, the band was ready to hit the road again, and they announced dates for a full scale tour to coincide with the release of Red, White, & Crue, a Greatest Hits collection. Saints of Los Angeles followed in 2008, and in the next few years, Motley Crue embarked on a series of tours and performed at a number of events, including: the Route of All Evil tour (2006),

For more information on booking Motley Crue, please contact Booking Entertainment. One of our top booking agents will be happy to work on your behalf to get you the best possible price to book any big name entertainer for your upcoming public, private or corporate event worldwide.

Booking Entertainment works to get the best possible Motley Crue booking fee and Motley Crue price for our clients while also providing the celebrity or famous entertainer with the level of professionalism and industry norms that they expect from an event run by a professional booking agency and production management.

Booking Entertainment uses our agency / management relationships and over 25 years of production experience to help buyers of headline / top name entertainers and does not claim or represent itself as the exclusive Motley Crue agent, manager or management company for any of the artists on our site.

Booking Entertainment does not claim or represent itself as the exclusive booking agency, business manager, publicist, speakers bureau or management for Motley Crue or any artists or celebrities on this website.