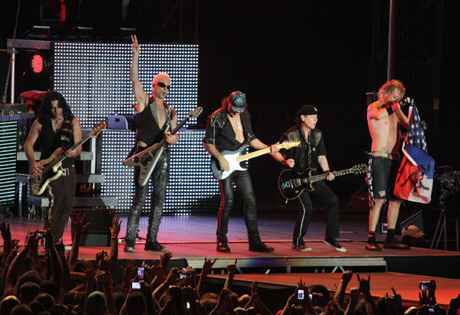 Start by filling out our no-obligation entertainment request form to check pricing and availability for Scorpions or whoever else you may want.

Our Scorpions agent will be happy to help you get Scorpions's availability and booking fee, or the price and availability for any other A-List entertainer, band, comedian or celebrity you may want for your corporate event, private party, wedding, birthday party or public show.

Scorpions are a German band formed in 1965. The group originally consisted of Rudolf Schenker and Klaus Meine, and currently includes those founding members along with Matthias Jabs, Pawe? M?ciwoda, and Mikkey Dee. Scorpions were formed in Hanover, Lower Saxony, West Germany, and began specializing in heavy metal and harder versions of rock.

Scorpions would soon begin recording and release their debut single in 1971 and their debut album the following year. By the mid-1970s the band released a series of albums that started to generate buzz internationally before releasing Lovedrive in 1979. The album would see them begin a lengthy run in the US touring while receiving honors from German award shows and an invitation to the Kremlin.

Scorpions mainly tour nowadays while keeping up a fairly consistent schedule, although there have been interviews mentioning a new album in 2020.

For more information on booking Scorpions, please contact Booking Entertainment. One of our top booking agents will be happy to work on your behalf to get you the best possible price to book any big name entertainer for your upcoming public, private or corporate event worldwide.

Booking Entertainment works to get the best possible Scorpions booking fee and Scorpions price for our clients while also providing the celebrity or famous entertainer with the level of professionalism and industry norms that they expect from an event run by a professional booking agency and production management.

Booking Entertainment uses our agency / management relationships and over 25 years of production experience to help buyers of headline / top name entertainers and does not claim or represent itself as the exclusive Scorpions agent, manager or management company for any of the artists on our site.

Booking Entertainment does not claim or represent itself as the exclusive booking agency, business manager, publicist, speakers bureau or management for Scorpions or any artists or celebrities on this website.