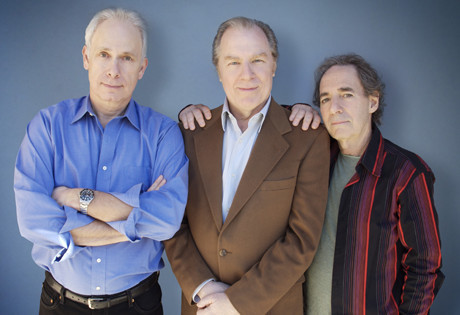 Start by filling out our no-obligation entertainment request form to check pricing and availability for Spinal Tap or whoever else you may want.

Our Spinal Tap agent will be happy to help you get Spinal Tap's availability and booking fee, or the price and availability for any other A-List entertainer, band, comedian or celebrity you may want for your corporate event, private party, wedding, birthday party or public show.

Spinal Tap is a 1980’s band unlike any other, for one key reason: it doesn’t exist. Born from the satirical film This is Spinal Tap, the band Spinal Tap has taken on a life of its own, in part a unique compliment to the witty insight of its creators. Christopher Guest, Michael McKean, and Harry Shearer embodied the fictitious members of Spinal Tap in the 1984 film, a film which successfully parodied such iconic bands as Aerosmith and Led Zeppelin. This is Spinal Tap chronicled not the rise to fame of the band, but it’s inevitable downfall after a decade of superstardom. The greatest testament to its authenticity is that some audience members didn’t even realize that Spinal Tap didn’t exist, and for good reason – the writers and creators of the film crafted a highly believable story of the band’s rise and fall, and provided an accompanying soundtrack that spawned recognizable and memorable songs.

To hear it from the creators, Spinal Tap’s history goes something like this:

Spinal Tap came together when Nigel Tufnel and David St. Hubbins met up in 1964 and decided to form a band which would reflect their shared passion for music. Initially called the Originals, after discovering that the name had already been taken by another band, they changed their name to the Thamesmen, and then finally Spinal Tap, after adding John Pepys, Denny Upham, and Ronnie Pudding to the lineup. Early singles such as "Gimme Some Money" and "Cups and Cakes," established their credibility in the UK, and they embarked on their first tour.

Ronnie Pudding left the band to form the Pudding People, and Derek Smalls was added to the lineup. Spinal Tap recorded "Listen to the Flower People," which went gold and launched Spinal Tap to worldwide success. Upham left, to be replaced by Ross MacLochness, and Spinal Tap released Matchstick Men (1968) and Silent but Deadly (1969), their first live album. A tragic and sudden gardening accident took the life of Pepys in 1969, and he was replaced by Eric Childs, bringing Spinal Tap into their most successful period.

Spinal Tap released a series of albums, including Brainhammer (1970), Nerve Damage (1971), Blood to Let (1972), and Intravenus de Milo (1974), before Childs was lost to another strange and tragic accident. Peter James Bond then joined Spinal Tap in time to release The Sun Never Sweats (1975), followed by Rock and Roll Creation (1977), and then Shark Sandwich (1980), which came shortly after Bond was lost to another sudden and mysterious accident, when he spontaneously combusted live on stage in the middle of a performance. Mick Shrimpton joined Spinal Tap, but by the time the band entered the next decade, their popularity was on the decline.

Smell the Glove was released in 1982, and Spinal Tap began what would become one of their last tours. With their fan base shrinking, Spinal Tap found itself relegated to smaller arenas and the challenges of dissention among the band members. Management upheavals and another sudden accident (this time Shrimpton’s combustion on stage) finally led to Spinal Tap parting ways in 1983.

A brief reunion in 1992 led to the release of Break Like the Wind, featuring the hits "Bitch School" and "Majesty of Rock," but they once again disappeared shortly thereafter, until 2009, when Shearer, McKean, and Guest reappeared in live performance, first at the Glastonbury  Festival and then later at the Wembley Arena in London. The appearance came just before the release of a brand new album, aptly titled “Back from the Dead,” which featured mostly re-recordings from the film’s original soundtrack.

Spinal Tap and the film This is Spinal Tap continue to be cult classics to fans of music and film, and McKean, Guest, and Shearer will forever be associated with the band’s antics and their spot-on parodies of some of the most iconic artists of the rock era.

For more information on booking Spinal Tap, please contact Booking Entertainment. One of our top booking agents will be happy to work on your behalf to get you the best possible price to book any big name entertainer for your upcoming public, private or corporate event worldwide.

Booking Entertainment works to get the best possible Spinal Tap booking fee and Spinal Tap price for our clients while also providing the celebrity or famous entertainer with the level of professionalism and industry norms that they expect from an event run by a professional booking agency and production management.

Booking Entertainment uses our agency / management relationships and over 25 years of production experience to help buyers of headline / top name entertainers and does not claim or represent itself as the exclusive Spinal Tap agent, manager or management company for any of the artists on our site.

Booking Entertainment does not claim or represent itself as the exclusive booking agency, business manager, publicist, speakers bureau or management for Spinal Tap or any artists or celebrities on this website.