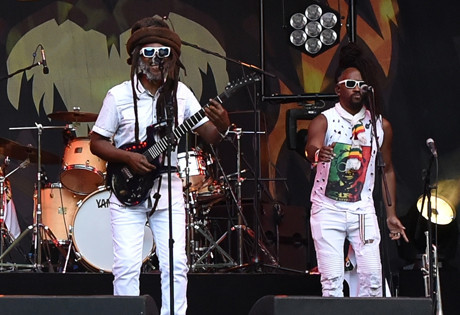 Start by filling out our no-obligation entertainment request form to check pricing and availability for Steel Pulse or whoever else you may want.

Our Steel Pulse agent will be happy to help you get Steel Pulse's availability and booking fee, or the price and availability for any other A-List entertainer, band, comedian or celebrity you may want for your corporate event, private party, wedding, birthday party or public show.

Steel Pulse began as a protest-oriented reggae band with a flair for blending Latin and jazz into their music. The band came together in 1975 in Birmingham, England, when founding members Basil Gabbidon, David Hinds, and Ronnie McQueen began performing Rasta-influenced music in the style of Bob Marley and Burning Spear. They named themselves after a racehorse, and added Steve Nisbett, Selwyn Brown, Alphonso Martin, and Michael Riley to the lineup to round out the band.

Steel Pulse ended up opening for a variety of new wave and punk bands, including Generation X, the Clash, and the Police. With material filled with political protest and social commentary, Steel Pulse infused a sense of humor into their performances, and were well received by the crowds. The singles "Kibudu, Mansetta and Abuku" and "Nyah Love" were released on small labels before Island Records finally signed Steel Pulse to a contract.

Steel Pulse released Handsworth Revolution in 1978, featuring the singles "Ku Klux Klan,” "Macka Splaff," "Prodigal Son," and "Soldiers." Tribute to the Martyrs came next in 1979, followed by Caught You in 1980, which was more pop and dance influenced. Steel Pulse set their sights on the American audience and embarked on a tour. Although Reggae Fever, their re-release of Caught You, did not fare well in the American market, they released True Democracy in 1982 on a different record label, and found the success they were looking for.

True Democracy became their first album to chart in the United States, on both the R&B and pop charts. Earth Crisis  followed in 1984, and then Babylon the Bandit in 1986, which garnered Steel Pulse a Grammy for Best Reggae Album. State of Emergency came next in 1988, and the band also contributed to Spike Lee’s film Do The Right Thing, with the single “Can’t Stand It.” Victims brought them another Grammy nomination in 1991, and Rastafari Centennial, a live album, followed in 1992.

Steel Pulse became the first reggae band to perform at a high-profile political event when they played Bill Clinton’s inaugural celebration in 1992, and the albums which followed for the next decade brought Steel Pulse even further recognition and acclaim: Vex (1994), Rage and Furty (1997), Living Legacy (1999), and African Holocaust (2004), which became Steel Pulse’s eleventh studio album.

Since then, Steel Pulse has contributed tracks to the Hold On 4 Haiti project, which seeks to provide funds to health clinics in the devastated country, and the band continues with plans for additional studio albums and tours in the near future.

For more information on booking Steel Pulse, please contact Booking Entertainment. One of our top booking agents will be happy to work on your behalf to get you the best possible price to book any big name entertainer for your upcoming public, private or corporate event worldwide.

Booking Entertainment works to get the best possible Steel Pulse booking fee and Steel Pulse price for our clients while also providing the celebrity or famous entertainer with the level of professionalism and industry norms that they expect from an event run by a professional booking agency and production management.

Booking Entertainment uses our agency / management relationships and over 25 years of production experience to help buyers of headline / top name entertainers and does not claim or represent itself as the exclusive Steel Pulse agent, manager or management company for any of the artists on our site.

Booking Entertainment does not claim or represent itself as the exclusive booking agency, business manager, publicist, speakers bureau or management for Steel Pulse or any artists or celebrities on this website.