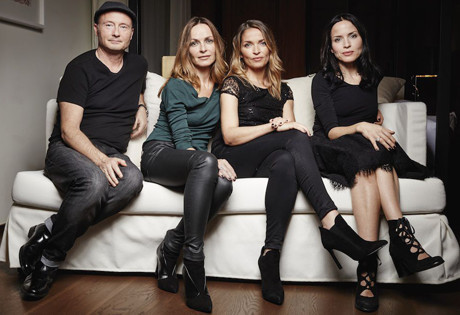 Start by filling out our no-obligation entertainment request form to check pricing and availability for The Corrs or whoever else you may want.

Our The Corrs agent will be happy to help you get The Corrs's availability and booking fee, or the price and availability for any other A-List entertainer, band, comedian or celebrity you may want for your corporate event, private party, wedding, birthday party or public show.

The Corrs are comprised of four siblings who together form the Irish band which blends Celtic folk and pop rock sounds to create the unique sound of the band. Andrea, Sharon, Caroline, and Jim were born into a musical household, and as children often watched their parents perform together as members of Sound Affair. All four children were taught to play piano, and in addition to that, Jim studied guitar, Sharon studied violin, and Caroline studied the drums.  Sharon and Jim, the elder two, began performing at local bars and clubs in the late 1980’s, and in 1990, the four came together to form the Corrs as they are now.

The Corrs had small roles in the 1991 film The Commitments, bringing them some exposure, and it was shortly thereafter that they secured management. They joined up with Dion Booking Agent & Management" href="https://www.bookingentertainment.com/artists/adult/Celine_ Dion.php">Celine Dion for her tour in 1996, and received the international exposure they had been seeking.  A meeting with famed composer David Foster followed, and he signed them to Atlantic Records.

The Corrs debut album, Forgiven, Not Forgotten, was released in 1995. While the album did well internationally, it did not reach the status they’d hoped for in the United States. Talk on Corners came next in 1997, and then The Corrs recorded a version of the song “Dreams” for a Fleetwood Mac tribute album. A re-release of Talk on Corners followed, and it fared much better the second time around, reaching platinum status in the UK and topping charts worldwide.

But it wasn’t until the new millennium that the Corrs hit mainstream success with the album In Blue, which featured a more pop sound than their previous albums. The album achieved staggering success overseas, reaching platinum success in Australia and Ireland. They released Best of The Corrs in 2001, followed by Borrowed Heaven (2004) and Home (2005.) Since 2006, the Corrs have taken a break so that the individual members can spend time with their families and pursue solo endeavors. Almost a decade later, the members confirmed that they were working on material for a new album—White Light—which ultimately released in November of 2015.

In addition to their music, the Corrs are known for being active supporters of a variety of charities and philanthropic endeavors, including hospital charities, The Prince’s Trust, and Nelson Mandela’s 46664 campaign. The Corrs recently wrapped an extensive worldwide tour in support of their latest 2017 album, Jupiter Calling.

Hiring The Corrs For Corporate Events, Private Parties And Public Concerts Is Easy With Booking Entertainment

For more information on booking The Corrs, please contact Booking Entertainment. One of our top booking agents will be happy to work on your behalf to get you the best possible price to book any big name entertainer for your upcoming public, private or corporate event worldwide.

Booking Entertainment works to get the best possible The Corrs booking fee and The Corrs price for our clients while also providing the celebrity or famous entertainer with the level of professionalism and industry norms that they expect from an event run by a professional booking agency and production management.

Booking Entertainment uses our agency / management relationships and over 25 years of production experience to help buyers of headline / top name entertainers and does not claim or represent itself as the exclusive The Corrs agent, manager or management company for any of the artists on our site.

Booking Entertainment does not claim or represent itself as the exclusive booking agency, business manager, publicist, speakers bureau or management for The Corrs or any artists or celebrities on this website.