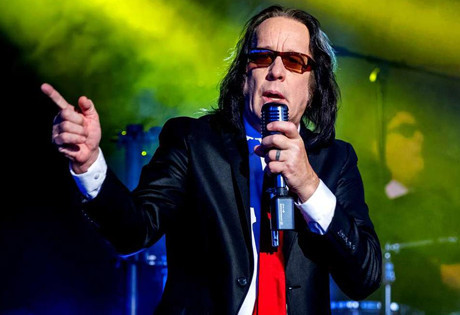 Start by filling out our no-obligation entertainment request form to check pricing and availability for Todd Rundgren or whoever else you may want.

Our Todd Rundgren agent will be happy to help you get Todd Rundgren's availability and booking fee, or the price and availability for any other A-List entertainer, band, comedian or celebrity you may want for your corporate event, private party, wedding, birthday party or public show.

Todd Rundgren was born in 1948 and grew up in Upper Darby, Pennsylvania. As a child, he learned to play the guitar and later formed the band Money, when he was still a teenager. After moving to Wildwood, New Jersey, he began to play with other established bands before forming his own, Woody’s Truck Stop, a Philly-based blues group.  He then formed Nazz in 1967, and earned the support of a record promoter who signed them with SGC Records.

Nazz, the group’s debut album, was released in 1968, and featured the single “Hello It’s Me,” which would later become a hit for Rundgren when he embarked on a solo career, but for Nazz the single barely charted. Todd Rundgren and Nazz began to work on their next endeavor, Nazz Nazz, which released in 1969.  Still only achieving moderate success, Todd Rundgren left the group and formed the band Runt. Runt enjoyed some moderate success but served more as a launching pad for Rundgren’s solo career, which was about to take off. After the release of Runt’s debut album, Rundgren was surprised to find the single “We Gotta Get You a Woman” reaching the top of the charts. The success of the single earned Todd his first contract as a solo artist and The Ballad of Todd Rundgren was released shortly thereafter.

The album truly showcased Todd Rundgren’s quirky humor and unique sound that paved the way for his future success not only as a musician but also as a producer and engineer. It wasn’t long before he was producing for acts such as the band, while at the same time working on his own material for future albums and singles. Over the next decade, Todd Rundgren scored hits with the singles “I Saw the Light,” “Couldn’t I Just Tell You,” “Real Man,” and “Can’t We Still Be Friends,” bringing him into the 1980’s, when he released Adventures in Utopia and also Deface the Music. He also offered fans one of the first music videos to use live action and computer graphics, with the single “Time Heals.” Healing followed in 1981, and then Swing to the Right in 1982.  The Ever Popular Tortured Artist Effect came next, giving audiences the iconic “Bang the Drum All Day,” but changes in record companies and management created some unrest for Todd Rundgren in the middle of the decade.

Nevertheless, Todd Rundgren gave audiences plenty of music throughout the rest of the 1980’s and 1990’s, including: A Cappella (1985), Nearly Human (1989), 2nd Wind (1991), No World Order (1993), The Individualist (1995), Up Against It (1997), and With a Twist (1997.) During this time he also wrote for a number of film soundtracks, including the movie Dumb and Dumber. By the end of the decade, Todd Rundgren was also branching out into music technology and utilizing the internet as a mechanism to bring music to fans directly, without requiring record company middle men.  In the latter part of the 1990’s, he also hit the road touring as a solo performer and with Ringo Starr’s All-Starr Band.  As if that weren’t enough, he produced a number of different works, including Bad Religion’s The New America.

For more information on booking Todd Rundgren, please contact Booking Entertainment. One of our top booking agents will be happy to work on your behalf to get you the best possible price to book any big name entertainer for your upcoming public, private or corporate event worldwide.

Booking Entertainment works to get the best possible Todd Rundgren booking fee and Todd Rundgren price for our clients while also providing the celebrity or famous entertainer with the level of professionalism and industry norms that they expect from an event run by a professional booking agency and production management.

Booking Entertainment uses our agency / management relationships and over 25 years of production experience to help buyers of headline / top name entertainers and does not claim or represent itself as the exclusive Todd Rundgren agent, manager or management company for any of the artists on our site.

Booking Entertainment does not claim or represent itself as the exclusive booking agency, business manager, publicist, speakers bureau or management for Todd Rundgren or any artists or celebrities on this website.