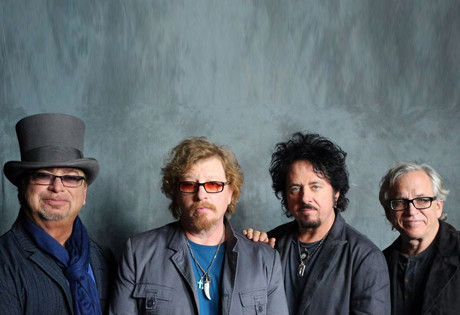 Start by filling out our no-obligation entertainment request form to check pricing and availability for Toto or whoever else you may want.

Wondering how to book Toto for your event? Let Booking Entertainment be Your entertainment booking agency for booking Toto for events worldwide.

Our Toto agent will be happy to help you get Toto's availability and booking fee, or the price and availability for any other A-List entertainer, band, comedian or celebrity you may want for your corporate event, private party, wedding, birthday party or public show.

The band Toto was created in 1978, founded by musicians David Paich, Steve Lukather, Steve & Jeff Porcaro, David Hungate, and Bobby Kimball.  Toto, the band’s debut album, was released in 1978 and immediately hit the charts, selling two million copies.  While Toto’s first three albums (Toto, Hydra, and Turn Back) were all successful, it was Toto IV, released in 1982, that rocketed the band to staggering success, in part on the strength of the hits “Rosanna” and “Africa,” and “I Won’t Hold You Back.” The band swept the Grammys that year, earning awards for Record of the Year, Best Pop Vocal Performance, Best Instrumental Arrangement With Vocal, Album of the Year, Best Engineered Recording, and Best Producer.

In the new millennium, Toto continued with the current lineup of Steve Lukather, David Paich, Steve Porcaro, Joseph Williams, and Simon Phillips.  They released Through the Looking Glass in 2002, followed by Falling in Between in 2006, and in 2010 they reunited for a tour to benefit Mike Porcaro, who was forced to leave the band as his health deteriorated as a result of the disease amyotrophic lateral sclerosis (ALS.)  To date, Toto has sold more than thirty-five million albums and as been inducted into the Musicians Hall of Fame. The band continues to perform, and has plans for a tour to coincide with their thirty-fifth anniversary in 2013.

For more information on booking Toto, please contact Booking Entertainment. One of our top booking agents will be happy to work on your behalf to get you the best possible price to book any big name entertainer for your upcoming public, private or corporate event worldwide.

Booking Entertainment works to get the best possible Toto booking fee and Toto price for our clients while also providing the celebrity or famous entertainer with the level of professionalism and industry norms that they expect from an event run by a professional booking agency and production management.

Booking Entertainment uses our agency / management relationships and over 25 years of production experience to help buyers of headline / top name entertainers and does not claim or represent itself as the exclusive Toto agent, manager or management company for any of the artists on our site.

Booking Entertainment does not claim or represent itself as the exclusive booking agency, business manager, publicist, speakers bureau or management for Toto or any artists or celebrities on this website.