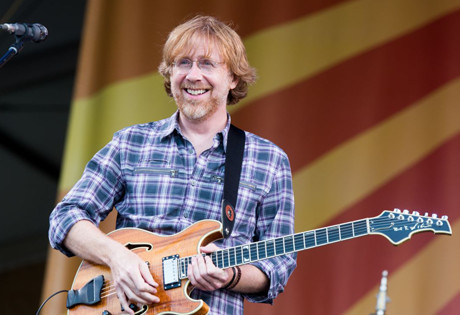 Start by filling out our no-obligation entertainment request form to check pricing and availability for Trey Anastasio or whoever else you may want.

Our Trey Anastasio agent will be happy to help you get Trey Anastasio's availability and booking fee, or the price and availability for any other A-List entertainer, band, comedian or celebrity you may want for your corporate event, private party, wedding, birthday party or public show.

Trey Anastasio, best known as the co-founder of the band Phish, was born in 1964 in Princeton, New Jersey. His early exposure to music led to a life-long love of not only playing, but also writing and producing. While attending the University of Vermont, he joined up with John Fishman, Mike Gordon, and Jeff Holdsworth to form Phish. After transferring to Goddard College, he began studying music composition more seriously and applied his new skills to many of the band’s early songs.

Phish encountered some changes to the lineup, but as of the late-1980’s, the band was enjoying steady success with its music.  The band released a series of hit albums before embarking on a long-term hiatus in the new millennium: Junta (1989), Lawn Boy (1990), A Picture of Nectar (1992), Rift (1993), Hoist (1994), Billy Breathes (1996), The Story of the Ghost (1998), and The Siket Disc (1999.)  As the driving compositional force behind the band, Trey Anastasio composed more than one hundred and fifty songs for Phish, most of them credited to him alone.

After Farmhouse (2000), for which Anastasio served as sole writer and producer, Trey embarked on a solo career and a variety of different projects which would challenge him musically. He joined forces with Les Claypool and Steward Copeland to create Oysterhead, and enjoyed success with them for two years. In 2002, Trey Anastasio released his official self-titled solo debut and embarked on a United States tour. Plasma, a live album, came next in 2003, followed by Seis de Mayo (2004), Shine (2005), and Bar 17 (2006.)

As a solo artist, Trey has also returned to his classical and compositional roots through his work with the New York and Los Angeles Philharmonics, and the Atlanta, Pittsburgh, Baltimore, and Colorado Symphonies. Phish reunited to release Round Room (2002), Undermind (2004), and Joy (2009), but Trey Anastasio has continued his solo projects in addition to his commitment to Phish. In 2007, Trey Anastasio released The Horseshoe Curve, another instrumental work, and debuted his orchestral epic, Time Turns Elastic, in the following year.

For more information on booking Trey Anastasio, please contact Booking Entertainment. One of our top booking agents will be happy to work on your behalf to get you the best possible price to book any big name entertainer for your upcoming public, private or corporate event worldwide.

Booking Entertainment works to get the best possible Trey Anastasio booking fee and Trey Anastasio price for our clients while also providing the celebrity or famous entertainer with the level of professionalism and industry norms that they expect from an event run by a professional booking agency and production management.

Booking Entertainment uses our agency / management relationships and over 25 years of production experience to help buyers of headline / top name entertainers and does not claim or represent itself as the exclusive Trey Anastasio agent, manager or management company for any of the artists on our site.

Booking Entertainment does not claim or represent itself as the exclusive booking agency, business manager, publicist, speakers bureau or management for Trey Anastasio or any artists or celebrities on this website.