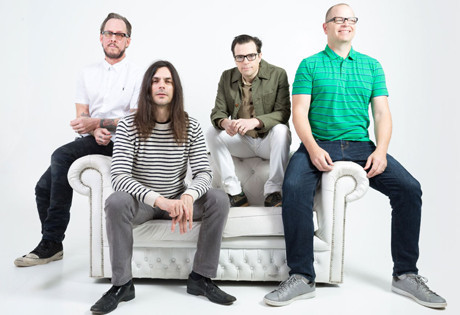 Start by filling out our no-obligation entertainment request form to check pricing and availability for Weezer or whoever else you may want.

Our Weezer agent will be happy to help you get Weezer's availability and booking fee, or the price and availability for any other A-List entertainer, band, comedian or celebrity you may want for your corporate event, private party, wedding, birthday party or public show.

Weezer had its start in Los Angeles, California in 1992 when members Rivers Cuomo, Matt Sharp, Patrick Wilson, and Jason Cropper earned the attention of Geffen Records after opening for the band Dogstar. Their debut album was released in 1994, and Weezer, also referred to as The Blue Album, spawned the hit single and music video “Undone- the Sweater Song,” garnering even more attention for the band.

“Buddy Holly” also received heavy airplay on MTV and earned Weezer numerous video music awards, and the album Weezer eventually reached triple platinum status. Weezer became known for their quirky sense of humor, often evident through their videos, and the band became a heavy presence in the mid 1990’s. The album Pinkerton came next in 1996, but as Weezer moved their attention away from the videos which had become their staple, a bit of enthusiasm for their music began to fade.

After regrouping, Weezer returned to participate in the Warped Tour (2000), and the Green Album followed in 2001. The Green Album was an enormous hit, and spawned the hits “Hash Pipe" and "Island in the Sun.” A series of albums followed for the millennium’s first decade, including: Maladroit (2002), Make Believe (2005), The Red Album (2008), Raditude (2009), and Hurley (2010), bringing audiences the hits “Beverly Hills,” “Pork and Beans,” “Troublemaker,” and the band’s delightful cover of the Monkee’s classic “I’m a Believer,” featured at the end of the film Shrek Forever After.

Most recently, Weezer has performed at the Bamboozle and Bonnaroo Music and Arts Festivals in 2010, and also at that year’s Reading and Leeds Festival. In the fall of 2010, Weezer performed for the New Orleans festival, the Voodoo Experience, and the band has plans for future albums and additional tours.

For more information on booking Weezer, please contact Booking Entertainment. One of our top booking agents will be happy to work on your behalf to get you the best possible price to book any big name entertainer for your upcoming public, private or corporate event worldwide.

Booking Entertainment works to get the best possible Weezer booking fee and Weezer price for our clients while also providing the celebrity or famous entertainer with the level of professionalism and industry norms that they expect from an event run by a professional booking agency and production management.

Booking Entertainment uses our agency / management relationships and over 25 years of production experience to help buyers of headline / top name entertainers and does not claim or represent itself as the exclusive Weezer agent, manager or management company for any of the artists on our site.

Booking Entertainment does not claim or represent itself as the exclusive booking agency, business manager, publicist, speakers bureau or management for Weezer or any artists or celebrities on this website.