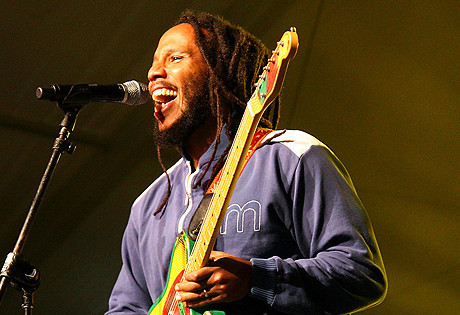 Start by filling out our no-obligation entertainment request form to check pricing and availability for Ziggy Marley or whoever else you may want.

Our Ziggy Marley agent will be happy to help you get Ziggy Marley's availability and booking fee, or the price and availability for any other A-List entertainer, band, comedian or celebrity you may want for your corporate event, private party, wedding, birthday party or public show.

David Nesta Marley (better known as “Ziggy Marley”) was born in 1968 in Jamaica, the oldest son to legendary musician Bob Marley. Ziggy Marley’s musical debut was when he was barely ten years old; he and his siblings sang with their father on the song “Children Playing in the Streets.” As a young man, Ziggy founded the Melody Makers, releasing their debut album, Play the Game Right, in 1985.

Ziggy Marley and the Melody Makers released a string of successful albums in the coming years: Conscious Party (1988), One Bright Day (1989), Jahmekya (1991), Joy and Blues (1993), Free Like We Want 2 Be (1995), Fallen is Babylon (1997), and Spirit of Music (1999.) Although they scored a number of hits, such as “True to Myself” and “People Get Ready,” in the 1990’s, Ziggy Marley and the Melody Makers found their popularity declining. After Spirit of Music, Ziggy Marley spent the next few years delving into politics and humanitarian endeavors, and in 2003, he embarked on a solo career which would prove to be highly successful.

Dragonfly was released in 2003, followed by Love is My Religion in 2006, both to critical acclaim; Love is My Religion earned Ziggy Marley a Grammy Award for Best Reggae Album. Since then, Ziggy Marley has released a number of successful albums, including: Family Tree (2009), Wild and Free (2011), and In Concert (2012.) In addition to his achievements in music, Ziggy Marley has is politically active, especially as a proponent for the legalization of marijuana, and he has founded the charity Unlimited Resources Giving Enlightenment, seeking to assist children in Africa and Jamaica. He has also contributed his music and voice to a number of films and television shows including Shark Tale, 50 First Dates, and Sesame Street.

Ziggy Marley is still active, performing and recording regularly. He divides his time between his residences in Florida, Jamaica, and California.

For more information on booking Ziggy Marley, please contact Booking Entertainment. One of our top booking agents will be happy to work on your behalf to get you the best possible price to book any big name entertainer for your upcoming public, private or corporate event worldwide.

Booking Entertainment works to get the best possible Ziggy Marley booking fee and Ziggy Marley price for our clients while also providing the celebrity or famous entertainer with the level of professionalism and industry norms that they expect from an event run by a professional booking agency and production management.

Booking Entertainment uses our agency / management relationships and over 25 years of production experience to help buyers of headline / top name entertainers and does not claim or represent itself as the exclusive Ziggy Marley agent, manager or management company for any of the artists on our site.

Booking Entertainment does not claim or represent itself as the exclusive booking agency, business manager, publicist, speakers bureau or management for Ziggy Marley or any artists or celebrities on this website.