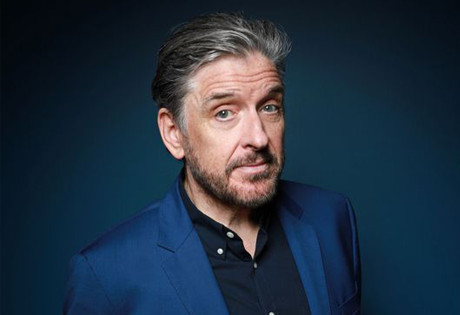 Start by filling out our no-obligation entertainment request form to check pricing and availability for Craig Ferguson or whoever else you may want.

Our Craig Ferguson agent will be happy to help you get Craig Ferguson 's availability and booking fee, or the price and availability for any other A-List entertainer, band, comedian or celebrity you may want for your corporate event, private party, wedding, birthday party or public show.

Craig Ferguson was born in 1962 in Glasgow, Scotland. Ferguson originally had aspirations to work as an electronic technician, but a visit to New York City to stay with an uncle in the early 1980’s opened his eyes to new possibilities, and he became interested in a potential career in entertainment. After briefly dabbling with music while playing in a rock band, Ferguson created a fictional comedic character, “Bing Hitler,” which became a huge hit at the 1986 Festival Fringe in Edinburgh.

Other opportunities immediately followed for Craig, including the creation of television pilot for The Craig Ferguson Show. While the show wasn’t picked up, it expanded Craig Ferguson’s exposure as a comedian and led him to other roles, notably Brad Majors in the Rocky Horror Show (1991), Father MacLean in Bad Boy Johnny and the Prophets of Doom (1994), and Oscar Madison in The Odd Couple, again at the Edinburgh Fringe. In 1993, Craig Ferguson created the show Dirt Detective, touring the Scottish countryside and examining its archaeological history. The Ferguson Theory came next, but after its cancellation in 1994, Craig moved to Los Angeles to embark on a career in the United States.

Ferguson’s first opportunity arrived after being cast on The Drew Carey Show in the role of Mr. Wick, which would last for seven years. During this productive period, Craig also began writing screenplays, three of which eventually became films in which he also starred: Saving Grace, The Big Tease, and I’ll Be There. He also appeared in the movies Lenny the Wonder Dog, Chain of Fools, Lemony Snicket’s A Series of Unfortunate Events, How to Train Your Dragon, The Ugly Truth, and Kick-Ass.

Craig Ferguson’s biggest rise to fame came in 2005, though, when he launched the Late Late Show with Craig Ferguson. The show ran for ten years on the CBS network and earned both Emmy nominations and Peabody Awards during its reign. After the show’s contract expired, Ferguson chose not to continue the show and instead moved on to a number of other endeavors, most notably the show Celebrity Name Game; the show has earned Craig two Daytime Emmy Awards for Outstanding Game Show Host thus far. In 2016, he launched the historical talk show Join or Die with Craig Ferguson for the History channel, and he also enjoyed a two year run of the Craig Ferguson Show on SiriusXM Staellite Radio.

In addition to his achievements in comedy and entertainment, Craig Ferguson’s novel, Between the Bridge and the River (2006), has enjoyed enormous success. His memoirs, American on Purpose: The Improbable Adventures of an Unlikely Patriot were equally successful, and the audio book version of the work has earned Craig a Grammy nomination. Ferguson’s third book, Riding the Elephant: A Memoir of Altercations, Humiliations, Hallucinations, and Observations is scheduled to publish in mid-2019.

For more information on booking Craig Ferguson , please contact Booking Entertainment. One of our top booking agents will be happy to work on your behalf to get you the best possible price to book any big name entertainer for your upcoming public, private or corporate event worldwide.

Booking Entertainment works to get the best possible Craig Ferguson booking fee and Craig Ferguson price for our clients while also providing the celebrity or famous entertainer with the level of professionalism and industry norms that they expect from an event run by a professional booking agency and production management.

Booking Entertainment uses our agency / management relationships and over 25 years of production experience to help buyers of headline / top name entertainers and does not claim or represent itself as the exclusive Craig Ferguson agent, manager or management company for any of the artists on our site.

Booking Entertainment does not claim or represent itself as the exclusive booking agency, business manager, publicist, speakers bureau or management for Craig Ferguson or any artists or celebrities on this website.