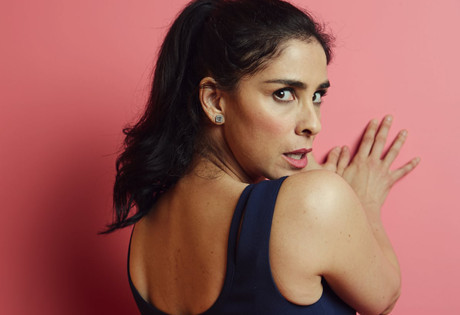 Start by filling out our no-obligation entertainment request form to check pricing and availability for Sarah Silverman or whoever else you may want.

Our Sarah Silverman agent will be happy to help you get Sarah Silverman 's availability and booking fee, or the price and availability for any other A-List entertainer, band, comedian or celebrity you may want for your corporate event, private party, wedding, birthday party or public show.

Sarah Silverman was born in 1970 in Manchester, New Hampshire. While attending New York University, she began experimenting with stand-up, performing at various clubs around New York City, often in the Greenwich Village area. Eventually, Sarah joined the writing team of Saturday Night Live in 1993, and became not only a writer, but an occasional performer on the show.

After SNL, Silverman joined the cast of Mr. Show on HBO, and also began appearing on a number of other television shows in small roles, including Seinfeld, VIP, and Crank Yankers. She also began working on the big screen, appearing in such films as: There’s Something About Mary, School of Rock, Overnight Delivery, Screwed, Evolution, and School for Scoundrels. Eventually, Sarah Silverman established a strong following, and by the mid 2000’s she was performing stand-up specials and in 2007, she launched The Sarah Silverman Program on Comedy Central.

The Sarah Silverman Program has been enormously successful. With ratings among the highest for any similar show on the network, the show follows Sarah and her friends in fictionalized versions of themselves, and earned Silverman an Emmy nomination. Shortly after the program launched, Silverman hosted the MTV Movie Awards and later appeared on the television series Monk.

Most recently, Sarah Silverman appeared in a dramatic role in the film Take This Waltz and published her memoirs, The Bedwetter: Stories of Courage, Redemption, and Pee (2010.) She also recently voiced one of the characters in Wreck-It Ralph (2012.)

For more information on booking Sarah Silverman , please contact Booking Entertainment. One of our top booking agents will be happy to work on your behalf to get you the best possible price to book any big name entertainer for your upcoming public, private or corporate event worldwide.

Booking Entertainment works to get the best possible Sarah Silverman booking fee and Sarah Silverman price for our clients while also providing the celebrity or famous entertainer with the level of professionalism and industry norms that they expect from an event run by a professional booking agency and production management.

Booking Entertainment uses our agency / management relationships and over 25 years of production experience to help buyers of headline / top name entertainers and does not claim or represent itself as the exclusive Sarah Silverman agent, manager or management company for any of the artists on our site.

Booking Entertainment does not claim or represent itself as the exclusive booking agency, business manager, publicist, speakers bureau or management for Sarah Silverman or any artists or celebrities on this website.