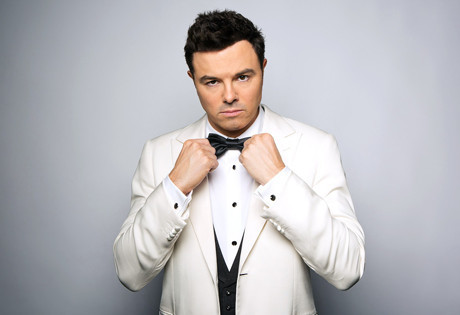 Start by filling out our no-obligation entertainment request form to check pricing and availability for Seth MacFarlane or whoever else you may want.

Our Seth MacFarlane agent will be happy to help you get Seth MacFarlane's availability and booking fee, or the price and availability for any other A-List entertainer, band, comedian or celebrity you may want for your corporate event, private party, wedding, birthday party or public show.

American producer and actor Seth MacFarlane was born in 1973 in Kent, Connecticut. As a child, Seth was particularly interested in cartoons and the art of illustration, and while still in elementary school he began creating and drawing his own characters. Eventually, he began to experiment with film, using an 8 mm camera to learn the craft of filmmaking. After graduating from high school, MacFarlane went on to study animation and film at the Rhode Island School of Design, earning a B.A. in Fine Arts.

Seth was actually recruited by executives at Hanna-Barbera after graduation, and he went on to become a writer and animator for the Cartoon Network. With CN, Seth MacFarlane worked on such series as I Am Weasel, Cow and Chicken, and Dexter’s Laboratory, often as both a storyboard artist and a writer for the show. It was during this time that he developed the concept for Family Guy, and he pitched the show to Hanna-Barbera. One of the development executives introduced MacFarlane to developers at the Fox network, and Seth was offered an opportunity to write and develop a pilot on a very small budget. Fox was impressed with the result, and purchased Family Guy for their network, and Seth McFarland became one of the industry’s youngest producers, at the age of only twenty-four.

Needless to say, Family Guy was an enormous success upon its airing in 1999, and since that time, Seth MacFarlane has grown into one of the era’s most well-known producers, writers, and actors. In addition to writing and producing Family Guy, MacFarlane also voices three of the show’s key characters – Brian Griffin, Stewie Griffin, and Peter Griffin. Through his genius, Family Guy has turned into a billion-dollar franchise, and led to the development of additional series, American Dad! And The Cleveland Show. For his work in television, MacFarlane has won two Primetime Emmy Awards.

On the big screen, Seth MacFarlane has written and directed the Ted films, and wrote and starred in the film A Million Ways to Die in the West (2014.) He also executive produced the update of the classic Carl Sagan series, Cosmos, this time starting Neil deGrasse Tyson.

Most recently, Seth MacFarlane took his career in a different entertainment direction, signing a deal with Universal Republic Records as a recording artist, focusing on big band standards. His debut album, Music is Better Than Words, arrived in 2011, and earned MacFarlane a Grammy Award nomination for Best Traditional Pop Vocal Album.

For more information on booking Seth MacFarlane, please contact Booking Entertainment. One of our top booking agents will be happy to work on your behalf to get you the best possible price to book any big name entertainer for your upcoming public, private or corporate event worldwide.

Booking Entertainment works to get the best possible Seth MacFarlane booking fee and Seth MacFarlane price for our clients while also providing the celebrity or famous entertainer with the level of professionalism and industry norms that they expect from an event run by a professional booking agency and production management.

Booking Entertainment uses our agency / management relationships and over 25 years of production experience to help buyers of headline / top name entertainers and does not claim or represent itself as the exclusive Seth MacFarlane agent, manager or management company for any of the artists on our site.

Booking Entertainment does not claim or represent itself as the exclusive booking agency, business manager, publicist, speakers bureau or management for Seth MacFarlane or any artists or celebrities on this website.