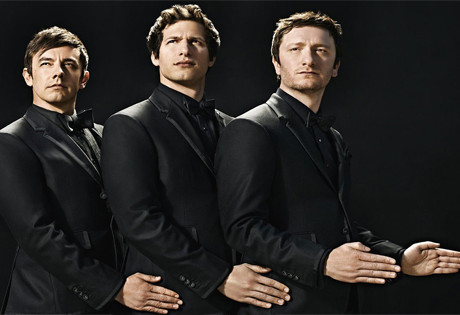 Start by filling out our no-obligation entertainment request form to check pricing and availability for The Lonely Island or whoever else you may want.

Our The Lonely Island agent will be happy to help you get The Lonely Island's availability and booking fee, or the price and availability for any other A-List entertainer, band, comedian or celebrity you may want for your corporate event, private party, wedding, birthday party or public show.

The American comedy group known as The Lonely Island was established by Jorma Taccone, Andy Samberg, and Akiva Schaffer in Berkeley, California in 2001. The three founding members of the group had been friends while in high school, and after all three had graduated from college, they moved to Los Angeles to begin producing short films. The Lonely Island began producing and uploading various sketches to online forums in 2001, creating a slowly growing buzz and fan base.

Although they struggled for a number of years, eventually their talents caught the attention of Saturday Night Live, and Samberg joined the cast as a regular in 2005. Taccone and Schaffer began work as writers for the show. The Lonely Island presented sketches on Saturday Night Live in a way that deviated from the show’s traditional format. Instead of pitching sketches, they recorded their sketches, eventually making them a sensation not only on the show, but also in the online forum, where many of their videos went viral. Some of their most famous video sketches include: “Dick in a Box,” “I Just Had Sex,” “Like a Boss,” “I’m on a Boat,” and “Jizz in My Pants.”

Since joining Saturday Night Live, The Lonely Island has produced its first feature film, Hot Rod, which was released in 2007. The group has also made the inevitable foray into music, since their sketches usually feature songs and often appear in the “music video” format. The Lonely Island’s first single, “Dick in a Box,” was an immediate hit, but their second hit, “Jizz in My Pants,” actually rose to platinum status in 2008. Since then, The Lonely Island has produced other platinum hits as well, including “I’m on a Boat” (featuring T-Pain) and “I Just Had Sex” (featuring Akon.) The group’s collection of songs can be found on their three albums released so far: Incredibad (2009); Turtleneck & Chain (2011); and The Wack Album (2013.)

For more information on booking The Lonely Island, please contact Booking Entertainment. One of our top booking agents will be happy to work on your behalf to get you the best possible price to book any big name entertainer for your upcoming public, private or corporate event worldwide.

Booking Entertainment works to get the best possible The Lonely Island booking fee and The Lonely Island price for our clients while also providing the celebrity or famous entertainer with the level of professionalism and industry norms that they expect from an event run by a professional booking agency and production management.

Booking Entertainment uses our agency / management relationships and over 25 years of production experience to help buyers of headline / top name entertainers and does not claim or represent itself as the exclusive The Lonely Island agent, manager or management company for any of the artists on our site.

Booking Entertainment does not claim or represent itself as the exclusive booking agency, business manager, publicist, speakers bureau or management for The Lonely Island or any artists or celebrities on this website.