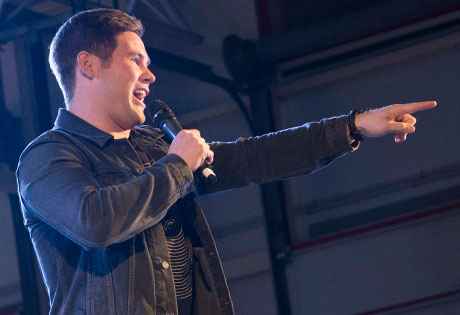 Start by filling out our no-obligation entertainment request form to check pricing and availability for Adam DeVine or whoever else you may want.

Our Adam DeVine agent will be happy to help you get Adam DeVine's availability and booking fee, or the price and availability for any other A-List entertainer, band, comedian or celebrity you may want for your corporate event, private party, wedding, birthday party or public show.

American actor, comedian, and producer Adam DeVine was born in 1983 in Iowa. Today, DeVine is best known for his comedic roles in films such as Why Him? and Isn’t It Romantic, but long before his rise to fame, DeVine grew up in the Waterloo area. At the age of eleven, Adam survived a terrible traffic accident; he was struck and nearly killed by a cement truck while riding his bike. That DeVine survived is a miracle in and of itself, but the accident also brought Adam to comedy, as telling jokes and watching comedies became his way of coping with the aftermath of his injuries.

After finishing school, DeVine moved to Los Angeles to pursue a career in acting. He teamed up with a number of friends to establish the sketch-comedy group, Mail Order Comedy, which established a viral following as a result of its dozens of YouTube and MySpace videos. He also garnered a number of small roles in films such as National Lampoon’s 301: The Legend of Awesomest Maximus (2009) and Mama’s Boy (2007.) But his first breakthrough came when Adam and his fellow troupe members landed a deal with Comedy Central in 2011 for the series Workaholics, serving not only as stars of the show but also as executive producers and creators.

The success of Workaholics led to his first major film role, in 2012’s Pitch Perfect. The film would be the first among four pairings with fellow comedian Rebel Wilson and set the stage for a career that is currently on the rise. After Pitch Perfect, Adam DeVine went on to star in: Neighbors (2014), Pitch Perfect 2 (2015), The Intern (2015), Why Him? (2016), When We First Met (2018), and most recently, Isn’t It Romantic (2019.) DeVine also appeared in a number of television series, including roles on Samantha Who?, Traffic Light, and Modern Family.

Most recently, Adam DeVine began his starring role in the hit HBO comedy series The Righteous Gemstones. DeVine also wrapped production on the film Extinct, in which he voices one of the main characters. The film is slated for release in 2020.

For more information on booking Adam DeVine, please contact Booking Entertainment. One of our top booking agents will be happy to work on your behalf to get you the best possible price to book any big name entertainer for your upcoming public, private or corporate event worldwide.

Booking Entertainment works to get the best possible Adam DeVine booking fee and Adam DeVine price for our clients while also providing the celebrity or famous entertainer with the level of professionalism and industry norms that they expect from an event run by a professional booking agency and production management.

Booking Entertainment uses our agency / management relationships and over 25 years of production experience to help buyers of headline / top name entertainers and does not claim or represent itself as the exclusive Adam DeVine agent, manager or management company for any of the artists on our site.

Booking Entertainment does not claim or represent itself as the exclusive booking agency, business manager, publicist, speakers bureau or management for Adam DeVine or any artists or celebrities on this website.