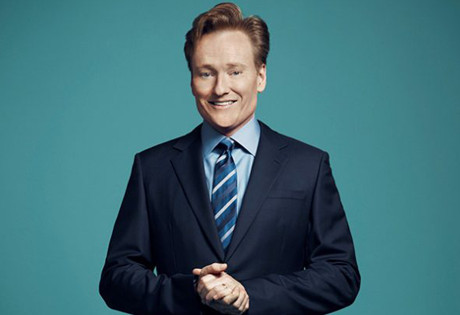 Start by filling out our no-obligation entertainment request form to check pricing and availability for Conan O'Brien or whoever else you may want.

Our Conan O'Brien agent will be happy to help you get Conan O'Brien's availability and booking fee, or the price and availability for any other A-List entertainer, band, comedian or celebrity you may want for your corporate event, private party, wedding, birthday party or public show.

Conan O’Brien was born in 1963 in Brookline, Massachusetts. Conan’s gifts for communication and humor were evident early on; he managed his school newspaper and won a number of writing contests while in high school. He began his university studies at Harvard, after graduating from high school in 1981 as his class’ valedictorian, and graduating with honors from Harvard as well, in 1985.


Following Harvard, Conan moved to Los Angeles and joined the writing team for Not Necessarily the News, the HBO comedy series. Eventually he was sought out by the writers of Saturday Night Live and joined their cast, while at the same time exploring improvisational comedy on his own. O’Brien often performed as an extra in the SNL sketches, and his tenure at the show led to his eventually departure and move to Los Angeles, where he began writing for the show the Simpsons in 1991. He spent two years there, and Conan O’Brien is credited with providing some of the most memorable episodes on the Simpsons.


In 1993, the buzz around town was that David Letterman was about to leave Late Night, and at the same time, Conan O’Brien was looking for an opportunity to perform in front of the camera instead of working behind it. An audition led to O’Brien succeeding Letterman on Late Night, and in the fall of 1993, the fairly unknown Conan O’Brien began hosting Late Night with Conan O’Brien from New York.
Enthusiasm for Conan O’Brien’s hosting of Late Night was slow to start, but the ratings rebounded slowly and steadily, and within a few years, the Late Night team began to rack up recognition for a high-quality show, earning their first Emmy nomination in 1996. The show went on to enormous success, earning an Emmy in 2007 and multiple Writers Guild Awards in 1997, 2000, and 2002-2004. By 2005, the show boasted a viewing audience of more than two million.


The last Late Night with Conan O’Brien aired in 2009, but another opportunity was just around the corner. With Jay Leno’s impending departure from the Tonight Show, Conan O’Brien was slated to take his place, and he began hosting the show in the summer of 2009. Viewers were eager to follow Conan to the Tonight Show, but a series of unfortunate events led to Conan leaving the Tonight Show, with Jay Leno’s return as host. O’Brien hosted his final Tonight Show episode in 2010, and set his sights on yet another opportunity, the late night talk show titled simply, Conan.
Today, Conan O’Brien has worked as a late-night talk show host for twenty-five years, more consecutive years than any other late-night talk show host in America. In addition to his work on television, Conan O’Brien recently voiced the character of Riddler for the 2017 film The Lego Batman Movie. In 2018, he launched the TBS series Conan Without Borders, which takes the host throughout the globe for humorous deep dives into local cultures. The show won an Emmy for Outstanding Creative Achievement in Interactive Media with an Unscripted Program.

For more information on booking Conan O'Brien, please contact Booking Entertainment. One of our top booking agents will be happy to work on your behalf to get you the best possible price to book any big name entertainer for your upcoming public, private or corporate event worldwide.

Booking Entertainment works to get the best possible Conan O'Brien booking fee and Conan O'Brien price for our clients while also providing the celebrity or famous entertainer with the level of professionalism and industry norms that they expect from an event run by a professional booking agency and production management.

Booking Entertainment uses our agency / management relationships and over 25 years of production experience to help buyers of headline / top name entertainers and does not claim or represent itself as the exclusive Conan O'Brien agent, manager or management company for any of the artists on our site.

Booking Entertainment does not claim or represent itself as the exclusive booking agency, business manager, publicist, speakers bureau or management for Conan O'Brien or any artists or celebrities on this website.