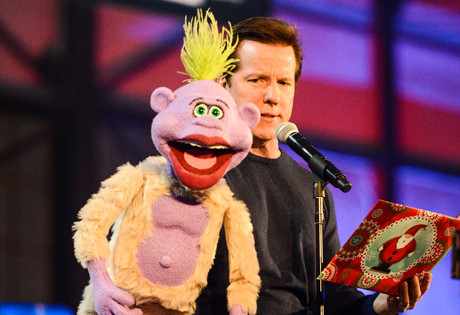 Start by filling out our no-obligation entertainment request form to check pricing and availability for Jeff Dunham or whoever else you may want.

Our Jeff Dunham agent will be happy to help you get Jeff Dunham's availability and booking fee, or the price and availability for any other A-List entertainer, band, comedian or celebrity you may want for your corporate event, private party, wedding, birthday party or public show.

Jeff Dunham was born in 1962 in Dallas, Texas. He was only eight years old when he began experimenting with ventriloquism, and before he entered middle school, he’d committed to the profession as his future. The hours and hours of practicing as a child eventually paid off; today, Dunham is known as “ America’s favorite ventriloquist.”

After performing his ventriloquist act at local events and venues, Jeff Dunham got his big break in 1976 when he was interviewed by Bill O’Reilly, an opportunity that finally brought his talents to the television viewing audience. Commercials followed, and Dunham surged full force into as much exposure as he could garner; even while attending university, he would travel the country on weekends, attempting as many as one hundred shows a year, many for high-profile corporations and private parties. In addition to providing Jeff Dunham with a living, the constant performing helped him to earn his big break when he was asked to join Sugar Babies, the Broadway show, as its opening act.  In the years following, Dunham performed at New York City’s Catch a Rising Star, and honed his trademark ventriloquist characters, such as Jose Jalapeno and Peanut. By the end of the 1980’s, Jeff Dunham had moved to Los Angeles, and earned a steady gig at the Comedy & Magic Club in Hermosa Beach.

In 1990, Jeff Dunham finally earned his coveted opportunity to perform on the Tonight Show Starring Johnny Carson. His performance earned him an invitation to join guests Bob Hope and B.B. King on Carson’s couch, a certain indication of his talent, but it would still be another twelve years struggling with performances in clubs, performing up to two hundred times a year. Finally, in 2003, Jeff Dunham performed on Comedy Central Presents, showcasing his now finely honed characters during his thirty-minute ventriloquist piece. Two years later, Dunham self-produced Jeff Dunham: Arguing with Myself, a comedy DVD, and Comedy Central agreed to air it. The show was enormously successful, selling two million copies of the DVD and attracting the same number of viewers.

Since that time, Jeff Dunham has been a constant presence on Comedy Central and other shows. His follow up to Arguing with Myself, Jeff Dunham: Spark of Insanity, has solidified his star status, and spawned the character which became an internet viral sensation, Achmed the Dead Terrorist. Today, Dunham finds himself with dozens of recorded specials, often dubbed into multiple languages and aired all across the world. His specials are among the highest rated on Comedy Central, and Dunham often fills arenas with thousands of patrons eager to watch his performances, a feat previously unheard of for a ventriloquist He recently signed a multi-platform deal with Comedy Central, and made the leap to the big screen, appearing in the film Dinner for Schmucks in 2010.

Ultimately, Jeff Dunham has sold more than four million DVDs and has some of the highest-hitting video clips on YouTube. His merchandise sales exceed seven million dollars, and he is ranked by Forbes as the third highest-paid comedian in the United States. He is credited with bringing the art of ventriloquism back into modern day comedy.

For more information on booking Jeff Dunham, please contact Booking Entertainment. One of our top booking agents will be happy to work on your behalf to get you the best possible price to book any big name entertainer for your upcoming public, private or corporate event worldwide.

Booking Entertainment works to get the best possible Jeff Dunham booking fee and Jeff Dunham price for our clients while also providing the celebrity or famous entertainer with the level of professionalism and industry norms that they expect from an event run by a professional booking agency and production management.

Booking Entertainment uses our agency / management relationships and over 25 years of production experience to help buyers of headline / top name entertainers and does not claim or represent itself as the exclusive Jeff Dunham agent, manager or management company for any of the artists on our site.

Booking Entertainment does not claim or represent itself as the exclusive booking agency, business manager, publicist, speakers bureau or management for Jeff Dunham or any artists or celebrities on this website.