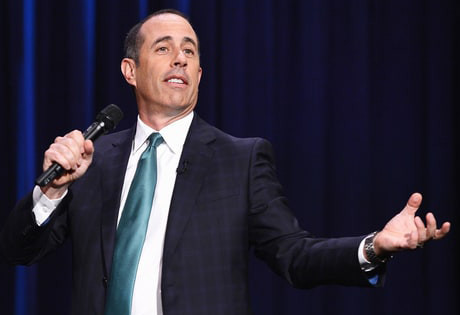 Start by filling out our no-obligation entertainment request form to check pricing and availability for Jerry Seinfeld or whoever else you may want.

Our Jerry Seinfeld agent will be happy to help you get Jerry Seinfeld 's availability and booking fee, or the price and availability for any other A-List entertainer, band, comedian or celebrity you may want for your corporate event, private party, wedding, birthday party or public show.

Jerry Seinfeld was born in 1954 in Brooklyn, New York and grew up in nearby Massapequa. Before attending college, he spent a few months working on a kibbutz in Israel, and then began his studies at Queens College. After receiving a degree in communications and theater, Jerry began experimenting with stand-up at local comedy clubs. His success on the stage led to an appearance with Rodney Dangerfield for an HBO special, and then to a small role on the series Benson.  Frequent appearances on The Tonight Show and Late Night with David Letterman helped to bring him more exposure, and by the late 1980’s, Jerry Seinfeld was in talks with NBC for the development of a potential new series.

Seinfeld the series debuted in 1989 and lasted for a full decade, and has lived on since in syndication.  The show was an enormous success, and has become the comedy platform with which Jerry Seinfeld is most frequently associated. When the show ended at the turn of the millennium, Seinfeld returned to the stage, launching a tour and comedy special, I’m Telling You For the Last Time. Jerry participated in the documentary film, Comedian, also; the film explores the process comics endure while developing and testing new material.

In the millennium’s first decade, Jerry Seinfeld appeared in a number of American Express commercials and webisodes, and presented the award for Best Documentary at the Academy Awards. But his biggest role in recent years has been as the voice of Barry, from the film Bee Movie. Jerry co-wrote and co-produced the film as well, and Bee Movie was recognized with a number of awards for its outstanding animated story. In addition to Bee Movie, Jerry Seinfeld and the entire Seinfeld cast made an appearance on the series Curb You Enthusiasm in 2009, and in 2011, Seinfeld embarked on an extensive tour of the United States and UK. He also appeared on the Daily Show in the same year.

Jerry Seinfeld is ranked twelfth by Comedy Central on the 100 Greatest Standups of All Time list.  In addition to his love of comedy, Seinfeld is also a Porsche enthusiast and boats approximately fifty vehicles. He continues to write, produce, and perform regularly.

For more information on booking Jerry Seinfeld , please contact Booking Entertainment. One of our top booking agents will be happy to work on your behalf to get you the best possible price to book any big name entertainer for your upcoming public, private or corporate event worldwide.

Booking Entertainment works to get the best possible Jerry Seinfeld booking fee and Jerry Seinfeld price for our clients while also providing the celebrity or famous entertainer with the level of professionalism and industry norms that they expect from an event run by a professional booking agency and production management.

Booking Entertainment uses our agency / management relationships and over 25 years of production experience to help buyers of headline / top name entertainers and does not claim or represent itself as the exclusive Jerry Seinfeld agent, manager or management company for any of the artists on our site.

Booking Entertainment does not claim or represent itself as the exclusive booking agency, business manager, publicist, speakers bureau or management for Jerry Seinfeld or any artists or celebrities on this website.