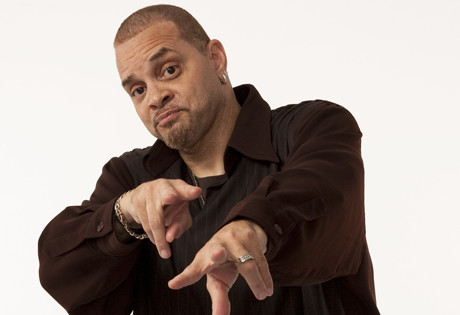 Start by filling out our no-obligation entertainment request form to check pricing and availability for Sinbad or whoever else you may want.

Our Sinbad agent will be happy to help you get Sinbad's availability and booking fee, or the price and availability for any other A-List entertainer, band, comedian or celebrity you may want for your corporate event, private party, wedding, birthday party or public show.

David Adkins, better known as “Sinbad,” was born in 1956 in Benton Harbor, Michigan. After graduating from the University of Denver, Sinbad entered the US Air Force. While stationed in Kansas, he would frequently visit local bars and clubs to dabble in stand-up comedy, a habit that eventually earned him a dishonorable discharge for repeatedly going AWOL, among other minor offenses. The event motivated Sinbad to pursue his dream of comedy even more, and he began actively competing and performing whenever possible.

After winning a round of Star Search (against comedian Dennis Miller, no less), Sinbad was cast on the sitcom the Redd Foxx Show, and then in 1987, on A Different World. His role alongside Lisa Bonet in the latter helped to bring Sinbad into households across America, increasing his fan base. He remained on the show until 1991, and then after leaving Sinbad accepted a number of different roles in a variety of films, including: Necessary Roughness, The Meteor Man, Coneheads, Houseguest, First Kid, and Jingle all the Way. He also enjoyed his own television series, The Sinbad Show, which ran for one season. The show earned Sinbad the Kids’ Choice Award nomination for Favorite Television Actor in 1995.

Sinbad has also hosted It’s Showtime at the Apollo and the 2000 Miss Universe Pageant, and contributed voice-overs to animated characters in the films Homeward Bound II: Lost in San Francisco and Ready to Run. But Sinbad’s greatest accomplishments still remain on the stage as a live performer. The HBO comedy special Sinbad: Brain Damaged and the Madison Square Garden performance of Sinbad – Afros and Bellbottoms earned him various awards. Sinbad – Son of a Preacher Man (1996) and Sinbad – Nothin’ but the Funk (1998) have also earned him recognition and the DVDs of these performances have been commercially successful.

Most recently, Sinbad has made a number of cameo appearances, including on the show It’s Always Sunny in Philadelphia. Comedy Central has listed him as one of the 100 Greatest Stand-Ups of All Time.

For more information on booking Sinbad, please contact Booking Entertainment. One of our top booking agents will be happy to work on your behalf to get you the best possible price to book any big name entertainer for your upcoming public, private or corporate event worldwide.

Booking Entertainment works to get the best possible Sinbad booking fee and Sinbad price for our clients while also providing the celebrity or famous entertainer with the level of professionalism and industry norms that they expect from an event run by a professional booking agency and production management.

Booking Entertainment uses our agency / management relationships and over 25 years of production experience to help buyers of headline / top name entertainers and does not claim or represent itself as the exclusive Sinbad agent, manager or management company for any of the artists on our site.

Booking Entertainment does not claim or represent itself as the exclusive booking agency, business manager, publicist, speakers bureau or management for Sinbad or any artists or celebrities on this website.