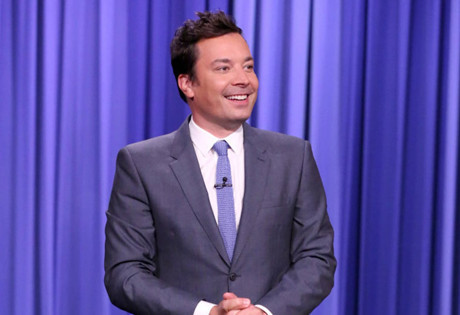 Start by filling out our no-obligation entertainment request form to check pricing and availability for Jimmy Fallon or whoever else you may want.

Our Jimmy Fallon agent will be happy to help you get Jimmy Fallon's availability and booking fee, or the price and availability for any other A-List entertainer, band, comedian or celebrity you may want for your corporate event, private party, wedding, birthday party or public show.

Jimmy Fallon was born in 1974 in Brooklyn, New York. As a young teen, he would often impress family and friends with his dead-on impersonations, and he also showed a talent for music, learning to play the guitar at the age of thirteen. Eventually, acting and comedy eclipsed music as a future career, and so Fallon entered the world of comedy, doing stand-up after graduating from the College of Saint Rose in Albany, New York.

Jimmy Fallon was working at the Improv Theater in Los Angeles, when he was offered the gig on Saturday Night Live in 1998. On SNL, Fallon became known for his impersonations of such notable actors and musicians as Jerry Seinfeld, Chris Rock, Hilary Swank, Alanis Morisette, Jeff Foxworthy, and Eddie Murphy, to name a few. He also became famous for his song parodies, and took the role alongside Tina Fey as co-anchor of Weekend Update. His most memorable sketch characters include; the young man in The Lovers; Jeffrey’s clerk; the DJ Joey Mack; The Leather Man; Pat Sullivan; Randy Goldman; Nick Burns; and Wade, member of 7 Degrees Celsius, a popular boy band. Fallon remained with the cast until 2004, at which time he launched a film career.

Late Night with Jimmy Fallon aired in 2009 with its first guests Justin Timberlake, Robert DeNiro, and Nick Carter.  The show has been an enormous success, and Jimmy Fallon has found himself to be the darling of the late night talk shows. In addition to hosting the show, Fallon has alsoco-hosted the MTV Movie Awards, in 2001 and 2005, and the Emmy Awards in 2010. Most recently, Jimmy Fallon released Blow Your Pants Off (2012), his second comedy album.

For more information on booking Jimmy Fallon, please contact Booking Entertainment. One of our top booking agents will be happy to work on your behalf to get you the best possible price to book any big name entertainer for your upcoming public, private or corporate event worldwide.

Booking Entertainment works to get the best possible Jimmy Fallon booking fee and Jimmy Fallon price for our clients while also providing the celebrity or famous entertainer with the level of professionalism and industry norms that they expect from an event run by a professional booking agency and production management.

Booking Entertainment uses our agency / management relationships and over 25 years of production experience to help buyers of headline / top name entertainers and does not claim or represent itself as the exclusive Jimmy Fallon agent, manager or management company for any of the artists on our site.

Booking Entertainment does not claim or represent itself as the exclusive booking agency, business manager, publicist, speakers bureau or management for Jimmy Fallon or any artists or celebrities on this website.