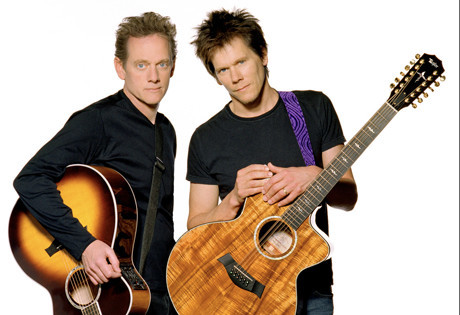 Start by filling out our no-obligation entertainment request form to check pricing and availability for Bacon Brothers or whoever else you may want.

Our Bacon Brothers agent will be happy to help you get Bacon Brothers's availability and booking fee, or the price and availability for any other A-List entertainer, band, comedian or celebrity you may want for your corporate event, private party, wedding, birthday party or public show.

The Bacon Brothers, comprised of Kevin Bacon and Michael Bacon, came together to create the musical duo in the mid 1990’s. Older brother Michael was born in 1949, and while Kevin Bacon went on to become one of America’s most well-known actors, it was Michael Bacon who established the Bacon Brothers as a musical outlet for the two, and brought Kevin on board.

Since their inception, the Bacon Brothers have released the albums: Forosoco (1997), Getting There (1999), Can’t Complain (2001), White Knuckles (2005), and New Years Day (2008.) The brothers perform and tour regularly, often selecting various charities as the beneficiaries for their concerts. Their 2009 tour included performances to benefit March on Stage and the Love Hope Strength Foundation, and in 2011 the Bacon Brothers donated proceeds from two shows to the California Dream Week, an organization that educates youth about sustainable and eco-friendly designs.

In addition to performing with his brother, Michael Bacon has established a stellar career as a film and television composer, lending his talents to a variety of projects, many of them Academy Award winning documentaries, shorts, and features: Boy Interrupted, Loverboy, King Gimp, D-Day Remembered, A Time for Justice, Losing Chase, A Place in the Land, The Last God Time, Shadow of Hate, The Johnstown Flood, and Sharks of Treasure Island. His talents can also be heard on innumerous programs for public television. Together as the Bacon Brothers, the duo has contributed songs to the films the Woodsman (2004, “Chop Wood, Carry Water”) and Red Betsy (2003, “When You Decide You’ve Stayed Too Long”).

For more information on booking Bacon Brothers, please contact Booking Entertainment. One of our top booking agents will be happy to work on your behalf to get you the best possible price to book any big name entertainer for your upcoming public, private or corporate event worldwide.

Booking Entertainment works to get the best possible Bacon Brothers booking fee and Bacon Brothers price for our clients while also providing the celebrity or famous entertainer with the level of professionalism and industry norms that they expect from an event run by a professional booking agency and production management.

Booking Entertainment uses our agency / management relationships and over 25 years of production experience to help buyers of headline / top name entertainers and does not claim or represent itself as the exclusive Bacon Brothers agent, manager or management company for any of the artists on our site.

Booking Entertainment does not claim or represent itself as the exclusive booking agency, business manager, publicist, speakers bureau or management for Bacon Brothers or any artists or celebrities on this website.