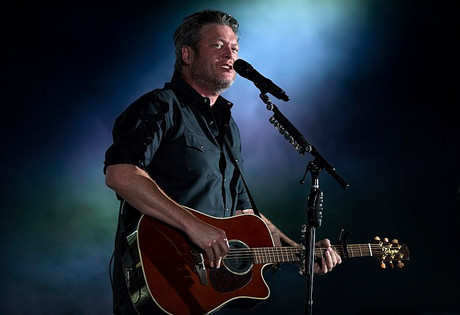 Start by filling out our no-obligation entertainment request form to check pricing and availability for Blake Shelton or whoever else you may want.

Our Blake Shelton agent will be happy to help you get Blake Shelton's availability and booking fee, or the price and availability for any other A-List entertainer, band, comedian or celebrity you may want for your corporate event, private party, wedding, birthday party or public show.

Blake Shelton was born in 1976 in Ada, Oklahoma. Having developed an early appreciation for music, he penned his first song as a teenager and had learned to play the guitar with proficiency. Shelton moved to Nashville when he was only seventeen with aspirations to pursue music professionally, and although the risky move was a gamble, it paid off quickly. After signing with Giant Records at the turn of the millennium, Blake Shelton released his smash-hit debut single, “Austin,” which remained at the time of the country charts for five straight weeks in 2001. Blake’s debut album, Blake Shelton, was also an enormous success, and produced the additional hits “Ol’ Red” and “All Over Me.”

Most recently, Blake Shelton joined the cast of the Voice as one of the show’s coaches, and released his album Based on a True Story (2013.) The album features the singles “Sure Be Cool if You Did” and “Boys ‘Round Here” and debuted at the top of the charts upon its release. For his contributions to music, Blake Shelton has been recognized with innumerous award nominations from: the Academy of Country Music, the Country Music Association, CMT Music Awards, Teen Choice Awards, the Grammy Awards, and the American Music Awards.  From these associations, he has won awards for Male Vocalist of the Year, Favorite Country Male Artist, Entertainer of the Year, and Song of the Year (for “Over You.”)

For more information on booking Blake Shelton, please contact Booking Entertainment. One of our top booking agents will be happy to work on your behalf to get you the best possible price to book any big name entertainer for your upcoming public, private or corporate event worldwide.

Booking Entertainment works to get the best possible Blake Shelton booking fee and Blake Shelton price for our clients while also providing the celebrity or famous entertainer with the level of professionalism and industry norms that they expect from an event run by a professional booking agency and production management.

Booking Entertainment uses our agency / management relationships and over 25 years of production experience to help buyers of headline / top name entertainers and does not claim or represent itself as the exclusive Blake Shelton agent, manager or management company for any of the artists on our site.

Booking Entertainment does not claim or represent itself as the exclusive booking agency, business manager, publicist, speakers bureau or management for Blake Shelton or any artists or celebrities on this website.