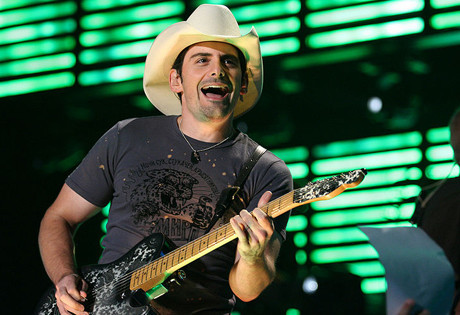 Start by filling out our no-obligation entertainment request form to check pricing and availability for Brad Paisley or whoever else you may want.

Our Brad Paisley agent will be happy to help you get Brad Paisley's availability and booking fee, or the price and availability for any other A-List entertainer, band, comedian or celebrity you may want for your corporate event, private party, wedding, birthday party or public show.

Brad Paisley was born in 1972 in Glen Dale, West Virginia. His grandfather gave him his first guitar when he was only eight years old, and by the time he was ten, Brad was seeking out opportunities to perform wherever possible. Paisley formed his first band when he was only thirteen, and a performance at the local Rotary Club brought his talents to the attention of a local radio station. The radio station’s associations led to gigs for Paisley opening up for a variety of high profile performers, including The Judds and George Jones, for nearly a decade.

Eventually, Brad Paisley pursued a degree in music business, graduating from Belmont University in 1995. An internship at Atlantic Records brought him even closer to the essential contacts that would eventually launch his own career, and in 1999 his debut album, Who Needs Pictures, was finally released. Since that time, Brad Paisley has released a series of highly successful albums, including: Part II (2001), Mud on the Tires (2003), Time Well Wasted (2005), Brad Paisley Christmas (2006), 5th Gear (2007), Play (2008), American Saturday Night (2009), and This is Country Music (2011.) The albums gave audiences the singles “He Didn’t Have to Be,” “I’m Gonna Miss Her (The Fishin’ Song),” “I Wish You’d Stay,” “Wrapped Around,” and “Two People Fell in Love,” “Celebrity,” “Mud on the Tires,” “Whiskey Lullaby,” “Alcohol,” “When I Get Where I’m Going,” “Out in the Parking Lot,” “Ticks,” “Online,” “Letter to Me,” “I’m Still a Guy,” “Waitin’ on a Woman,” “Old Alabama,” and “Remind Me.”

Brad Paisley is known for his extensive and nearly constant tour schedule, alongside his band, which consists of musicians Gary Hooker, Randle Currie, Kendal Marcy, Justin Williamson, Kenny Lewis, and Ben Sesar. For his music, Paisley has accumulated a staggering number of music award nominations and wins, including Male Vocalist of the Year from both the CMA and ACM in 2008. He has also won: the Entertainer of the Year Award in 2010 at the CMA Awards; a Grammy for Best Male Vocal Performance in 2009; and American Music Awards for Favorite Country Male Artist in 2008 and again in 2010. Of his seven studio albums, all of them have certified gold or higher, and collectively they have spawned eighteen number one hits.

Most recently, Brad Paisley released the album Wheelhouse in 2013, featuring the singles “Southern Comfort Zone” and “Beat this Summer.”

For more information on booking Brad Paisley, please contact Booking Entertainment. One of our top booking agents will be happy to work on your behalf to get you the best possible price to book any big name entertainer for your upcoming public, private or corporate event worldwide.

Booking Entertainment works to get the best possible Brad Paisley booking fee and Brad Paisley price for our clients while also providing the celebrity or famous entertainer with the level of professionalism and industry norms that they expect from an event run by a professional booking agency and production management.

Booking Entertainment uses our agency / management relationships and over 25 years of production experience to help buyers of headline / top name entertainers and does not claim or represent itself as the exclusive Brad Paisley agent, manager or management company for any of the artists on our site.

Booking Entertainment does not claim or represent itself as the exclusive booking agency, business manager, publicist, speakers bureau or management for Brad Paisley or any artists or celebrities on this website.