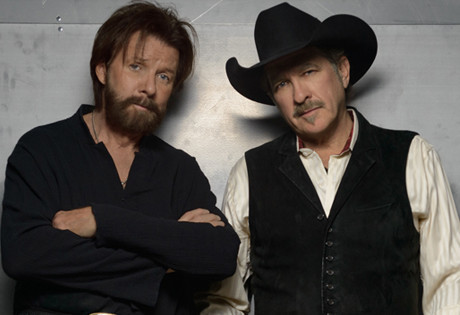 Start by filling out our no-obligation entertainment request form to check pricing and availability for Brooks & Dunn or whoever else you may want.

Our Brooks & Dunn agent will be happy to help you get Brooks & Dunn's availability and booking fee, or the price and availability for any other A-List entertainer, band, comedian or celebrity you may want for your corporate event, private party, wedding, birthday party or public show.

Brooks & Dunn came together when Ronnie Dunn and Kix Brooks established themselves as a country music duo in 1990. Although both Dunn and Brooks had experienced some prior success on their own, Brooks & Dunn’s unique blend of country, rock, and a bit of honky-tonk proved to be a formula which allowed them to achieve together far beyond what they had previously as solo artists.

Brooks & Dunn rode their success all the way into the millennium’s first decade, until disbanding as a full-time duo in 2009. The group released an additional compilation album and performed a final concert in 2010 before parting ways for a number of years. During this time, Ronnie Dunn released a self-titled album, featuring the top ten hit, “Bleed Red,” in 2011. He has also contributed guest vocals on tracks for a number of different artists, including Ashley Monroe, Carlene Carter, Keith Urban, and Trisha Yearwood. Kix Brooks released the album New to this Town in 2012.

Brooks & Dunn reunited in 2014 to perform alongside Reba McEntire for a series of shows in Las Vegas. In 2016, they joined forces with other artists to perform on the album Forever Country, featuring medleys of hits such as “I Will Always Love You,” “On the Road Again,” and “Take Me Home, Country Roads.” The group remains one of America’s most successful country duos in recent memory, having earned two Grammies, seventeen Country Music Association Awards, and a staggering twenty-six Academy of Country Music Awards throughout their time together.

For more information on booking Brooks & Dunn, please contact Booking Entertainment. One of our top booking agents will be happy to work on your behalf to get you the best possible price to book any big name entertainer for your upcoming public, private or corporate event worldwide.

Booking Entertainment works to get the best possible Brooks & Dunn booking fee and Brooks & Dunn price for our clients while also providing the celebrity or famous entertainer with the level of professionalism and industry norms that they expect from an event run by a professional booking agency and production management.

Booking Entertainment uses our agency / management relationships and over 25 years of production experience to help buyers of headline / top name entertainers and does not claim or represent itself as the exclusive Brooks & Dunn agent, manager or management company for any of the artists on our site.

Booking Entertainment does not claim or represent itself as the exclusive booking agency, business manager, publicist, speakers bureau or management for Brooks & Dunn or any artists or celebrities on this website.