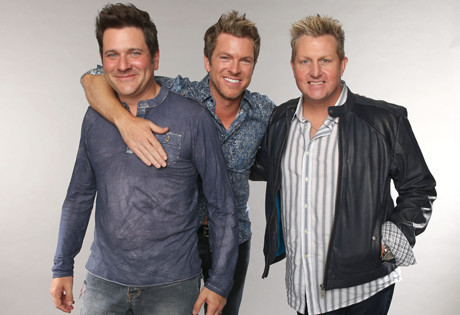 Start by filling out our no-obligation entertainment request form to check pricing and availability for Rascal Flatts or whoever else you may want.

Our Rascal Flatts agent will be happy to help you get Rascal Flatts's availability and booking fee, or the price and availability for any other A-List entertainer, band, comedian or celebrity you may want for your corporate event, private party, wedding, birthday party or public show.

Rascal Flatts was founded in Nashville, Tennessee in the late 1990’s when musicians Jay DeMarcus and Gary LeVox, who had been performing with other artists, united to form the band. With the addition of Joe Don Rooney, the trio recorded a demo consisting of three songs which caught the attention of the record labels right away. Rascal Flatts released their debut single, “Prayin’ for Daylight,” just at the turn of the millennium, and the single rose to the top ten right away. A debut album, Rascal Flatts, followed, and spawned three additional top ten hits: “This Everyday Love,” “I’m Movin’ On,” and “While You Loved Me.” Two years later, Rascal Flatts earned the Academy of Country Music’s award for the Song of the Year (for “I’m Moving On.”)

With such an auspicious start to their journey, it’s no big surprise that Rascal Flatts has continued to give audiences hit after hit album since then, including: Melt (2002), Feels Like Today (2004), Me and My Gang (2006), Still Feels Good (2007), Unstoppable (2009), and Nothing Like This (2010.) The albums spawned the number one country singles: “These Days,” “Mayberry,” “Bless the Broken Road,” “Fast Cars and Freedom,” “What Hurts the Most,” “My Wish,” “Stand,” “Take Me There,” “Here,” “Here Comes Goodbye,” and “Why Wait.” Rascal Flatts has been recognized by: the Academy of Country Music with awards for Top New Vocal Duo or Group, Song of the Year, and Top Vocal Group multiple times; the Country Music Association with awards for Vocal Group of the Year multiple times; the American Music Awards for Favorite Country Band, Duo or Group; and the Grammy Awards for Best Country Song. In addition, Rascal Flatts is among the highest grossing live performing group of the new millennium, selling more than seven million tickets to date.

Most recently, Rascal Flatts released the album Changed in 2012, featuring the hit singles “Come Wake Me Up” and “Banjo.”  The band has also released teasers regarding a new album coming soon, and in 2013 the band embarked on on the CMC Rocks the Hunter tour as the headlining act. Rascal Flatts has also recently embarked on a new and unusual endeavor together, forming a restaurant group with goals to open the Rascal Flatts American Bar & Grill nationwide. Their first location opened in Phoenix in 2012.

For more information on booking Rascal Flatts, please contact Booking Entertainment. One of our top booking agents will be happy to work on your behalf to get you the best possible price to book any big name entertainer for your upcoming public, private or corporate event worldwide.

Booking Entertainment works to get the best possible Rascal Flatts booking fee and Rascal Flatts price for our clients while also providing the celebrity or famous entertainer with the level of professionalism and industry norms that they expect from an event run by a professional booking agency and production management.

Booking Entertainment uses our agency / management relationships and over 25 years of production experience to help buyers of headline / top name entertainers and does not claim or represent itself as the exclusive Rascal Flatts agent, manager or management company for any of the artists on our site.

Booking Entertainment does not claim or represent itself as the exclusive booking agency, business manager, publicist, speakers bureau or management for Rascal Flatts or any artists or celebrities on this website.