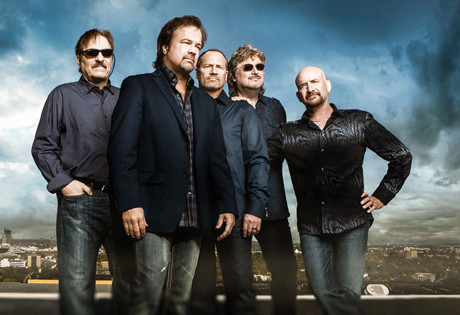 Start by filling out our no-obligation entertainment request form to check pricing and availability for Restless Heart or whoever else you may want.

Our Restless Heart agent will be happy to help you get Restless Heart's availability and booking fee, or the price and availability for any other A-List entertainer, band, comedian or celebrity you may want for your corporate event, private party, wedding, birthday party or public show.

Playing a pop-friendly brand of country-rock indebted to the Eagles, Restless Heart was one of the most popular country bands of the late '80s and early '90s, scoring numerous hits on the country charts and a few major successes on adult contemporary radio as well. The band first got together in 1984 at the behest of producer-songwriter Tim DuBois, who wanted some musicians to demo a batch of material that walked the line between country and pop. Drummer-vocalist John Dittrich, pianist Dave Innis, bassist-vocalist Paul Gregg, and guitarist Greg Jennings were initially joined by singer Verlon Thompson, and the demo sessions went so well that the group decided to stay together and pursue a record deal. They signed with RCA in 1983, at which point Thompson was replaced by lead singer Larry Stewart, a demo vocalist Innis knew from Belmont College in Nashville.

Restless Heart's self-titled debut album was released in 1985 and contained three Top 10 hits: "I Want Everyone to Cry," "(Back to The) Heartbreak Kid," and "Til I Loved You." The 1986 follow-up, Wheels, was their true breakthrough release, topping the country charts and producing four No. 1 hits: "That Rock Won't Roll," the ballad "I'll Still Be Loving You" (also a No. 3 adult contemporary hit), "Why Does It Have to Be (Wrong or Right)," and "Wheels." Big Dreams in a Small Town in 1988 gave the band six consecutive chart-toppers thanks to its first two singles, "A Tender Lie" and "The Bluest Eyes in Texas." Its title track and "Say What's in Your Heart" also reached the Top 5. In 1989, the album Fast Movin' Train spawned two more Top Five hits in the title track and "Dancy's Dream."

Stewart left the group for a solo career in 1990. He later scored a big hit with "Alright Already," but never matched it. Meanwhile, Gregg and Dittrich split lead vocal duties on 1992's Big Iron Horses, which gave them another adult contemporary crossover hit with "When She Cries." Innis left the band in 1992, and the remaining trio watched "Tell Me What You Dream" become their first adult contemporary chart-topper in 1993. However, after 1994's Matters of the Heart, they disbanded. Jennings joined Vince Gill's band, while Dittrich worked with the Buffalo Club. Restless Heart reunited in 1998 -- minus Innis with four new tracks appearing on a Greatest Hits compilation, as well as a tour with Gill. All five members of Restless Heart later reunited, with their sound intact, for the 2004 album Still Restless. ~ Steve Huey, All Music Guide

For more information on booking Restless Heart, please contact Booking Entertainment. One of our top booking agents will be happy to work on your behalf to get you the best possible price to book any big name entertainer for your upcoming public, private or corporate event worldwide.

Booking Entertainment works to get the best possible Restless Heart booking fee and Restless Heart price for our clients while also providing the celebrity or famous entertainer with the level of professionalism and industry norms that they expect from an event run by a professional booking agency and production management.

Booking Entertainment uses our agency / management relationships and over 25 years of production experience to help buyers of headline / top name entertainers and does not claim or represent itself as the exclusive Restless Heart agent, manager or management company for any of the artists on our site.

Booking Entertainment does not claim or represent itself as the exclusive booking agency, business manager, publicist, speakers bureau or management for Restless Heart or any artists or celebrities on this website.