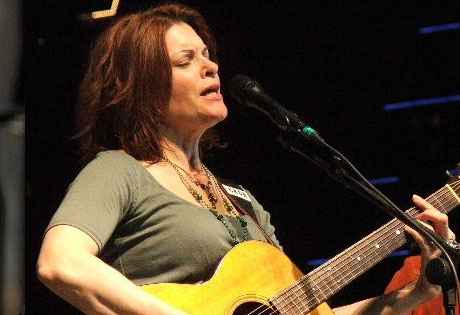 Start by filling out our no-obligation entertainment request form to check pricing and availability for Rosanne Cash or whoever else you may want.

Our Rosanne Cash agent will be happy to help you get Rosanne Cash's availability and booking fee, or the price and availability for any other A-List entertainer, band, comedian or celebrity you may want for your corporate event, private party, wedding, birthday party or public show.

Rosanne Cash was born in 1955 to her famous father, Johnny Cash, and Vivian Cash. After her parents separated, Rosanne was raised by her mother but as soon as she graduated from high school she embarked on a career in music, traveling alongside her father and performing often as a background vocalist. Her experiences planted the seed for what would become her own career as a musician in the future. After attending Vanderbilt University for her college studies, Rosanne Cash moved to Los Angeles and in 1978 she recorded her first demo.

Cash’s demo caught the attention of Columbia Records, and she signed with the label shortly thereafter. In 1980, her Columbia debut, Right or Wrong, was released to critical acclaim and commercial success. The singles “Take Me, Take Me,” “No Memories Hangin’ Around,” and “Couldn’t Do Nothin’ Right” all reached into the top 25 on the charts, and her next album, Seven Year Ache, fared even better upon its release in the year following. Since that time, Rosanne Cash has given audiences the albums: Seven Year Ache (1981), Somewhere in the Stars (1982), Rhythm & Romance (1985), King’s Record Shop (1987), Interiors (1990), The Wheel (1993), 10 Song Demo (1996), Rules of Travel (2003), Black Cadillac (2006), and The List (2009.) Her eleven number one singles over the years have earned Rosanne Cash nine Grammy nominations with a win for the single “I Don’t Know Why You Don’t Want Me” in 1985.

In addition to her music, Rosanne Cash is an accomplished writer. She has authored a number of books over the years, including Bodies of Water (1997), Songs Without Rhyme: Prose by Celebrated Songwriters (2001), and Penelope Jane: A Fairy’s Tale (2006.) Cash is also an active supporter of a number of charitable organizations, including SOS Children’s Villages and Children, Incorporated.

Rosanne Cash continues to write, record, and perform. Her next studio album is slated for release in 2013.

For more information on booking Rosanne Cash, please contact Booking Entertainment. One of our top booking agents will be happy to work on your behalf to get you the best possible price to book any big name entertainer for your upcoming public, private or corporate event worldwide.

Booking Entertainment works to get the best possible Rosanne Cash booking fee and Rosanne Cash price for our clients while also providing the celebrity or famous entertainer with the level of professionalism and industry norms that they expect from an event run by a professional booking agency and production management.

Booking Entertainment uses our agency / management relationships and over 25 years of production experience to help buyers of headline / top name entertainers and does not claim or represent itself as the exclusive Rosanne Cash agent, manager or management company for any of the artists on our site.

Booking Entertainment does not claim or represent itself as the exclusive booking agency, business manager, publicist, speakers bureau or management for Rosanne Cash or any artists or celebrities on this website.