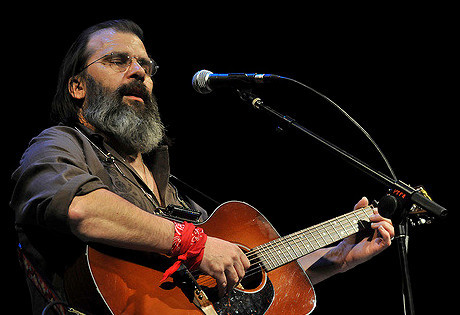 Start by filling out our no-obligation entertainment request form to check pricing and availability for Steve Earle or whoever else you may want.

Our Steve Earle agent will be happy to help you get Steve Earle's availability and booking fee, or the price and availability for any other A-List entertainer, band, comedian or celebrity you may want for your corporate event, private party, wedding, birthday party or public show.

Singer-songwriter Steve Earle was born in 1955 in Virginia but grew up in San Antonio, Texas. Long before Earle rose to prominence as one of the industry’s most notable writers and performers, he began studying guitar as a child and by the time he was a teenager, his talents were evident. Earle left school at the age of sixteen and moved first to Houston, and then to Nashville in 1974.

While in Nashville, Steve began writing songs and playing guitar in a variety of bands, most notably Guy Clark’s band. He eventually garnered a deal with a local publishing company, with which he worked for a few years, until he returned to Texas to start his own band. For the remainder of the decade, Steve Earle performed with The Dukes, until in the early 80’s he returned to Nashville as a songwriter again, scoring his first hit with the single “When You Fall in Love,” recorded by Johnny Lee. In 1982, Earle released his own EP, Pink & Black, which garnered the attention of MCA Records, earning him a multi-album deal.

Steve Earle’s debut album, Guitar Town, arrived in 1986 and was an enormous success, rising to the top of the charts and spawning the top-ten hit “Goodbye’s All We’ve Got Left.” For the next two decades and well into the new millennium, Earle gave audiences a number of chart-topping country albums, including: Copperhead Road (1988), Transcendental Blues (2000), Jerusalem (2002), Townes (2009), and I’ll Never Get Out of This World Alive (2011.)

For his work, Steve Earle has earned fourteen Grammy nominations so far, with three wins for Best Contemporary Folk Album (in 2005, 2008, and 2010.) In addition, Earle has an Emmy nomination for his work on the television series Treme.

For more information on booking Steve Earle, please contact Booking Entertainment. One of our top booking agents will be happy to work on your behalf to get you the best possible price to book any big name entertainer for your upcoming public, private or corporate event worldwide.

Booking Entertainment works to get the best possible Steve Earle booking fee and Steve Earle price for our clients while also providing the celebrity or famous entertainer with the level of professionalism and industry norms that they expect from an event run by a professional booking agency and production management.

Booking Entertainment uses our agency / management relationships and over 25 years of production experience to help buyers of headline / top name entertainers and does not claim or represent itself as the exclusive Steve Earle agent, manager or management company for any of the artists on our site.

Booking Entertainment does not claim or represent itself as the exclusive booking agency, business manager, publicist, speakers bureau or management for Steve Earle or any artists or celebrities on this website.