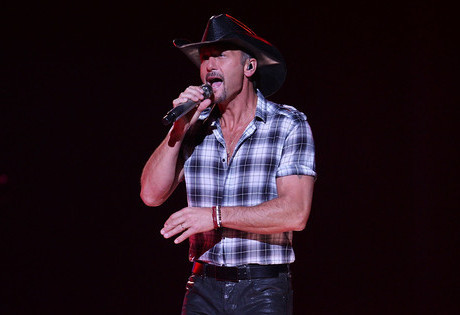 Start by filling out our no-obligation entertainment request form to check pricing and availability for Tim McGraw or whoever else you may want.

Our Tim McGraw agent will be happy to help you get Tim McGraw's availability and booking fee, or the price and availability for any other A-List entertainer, band, comedian or celebrity you may want for your corporate event, private party, wedding, birthday party or public show.

Tim McGraw was born in 1967 in Louisiana. Young Tim first fell in love with sports and attended university on an athletic scholarship. But during his college years he also fell in love with music, and quickly learned to play the guitar. Within a few years, he’d become proficient on the instrument and opted to leave college and instead set his sights for Nashville in the hopes of a career as a country music performer.

McGraw’s talents caught the attention of Curb Records, and he signed with the label in the early 1990’s. His debut album, Tim McGraw, was released in 1992 and spawned the minor hits “Memory Lane,” “Welcome to the Club,” and “Two Steppin Mind.”  But it was Tim McGraw’s sophomore effort, the album Not a Moment Too Soon, which became a monster hit in 1994, spawning the hit singles “Indian Outlaw,” “Don’t Take the Girl,” “Down on the Farm,” and “Refried Dreams,” The album went on to become 1994’s best selling country album and it launched Tim McGraw’s career as a country music superstar.

Since that time, Tim McGraw has given his fans a series of hit albums, including: All I Want (1995), Everywhere (1997), A Place in the Sun (1999), Set This Circus Down (2001), Live Like You Were Dying (2004), Let It Go (2007), Southern Voice (2009), and Emotional Traffic (2012.) Number one country hits from the albums include: “Not A Moment Too Soon,” “I Like It, I Love It,” “Everywhere,” “Just to See You Smile,” “Where the Green Grass Grows,” “Please Rmember Me,” “Something Like That,” “Angry All the Time,” “The Cowboy in Me,” “Unbroken,” “Live Like You Were Dying,” “Back When,” “Last Dollar,” “Southern Voice,” and “Felt Good on My Lips.” In total, McGraw has placed twenty-three songs on the country charts in the number one spots, and has been the reciepient of innumerous awards in recognition of his achievements: fourteen Academy of Country Music Awards, eleven Country Music Association Awards, ten American Music Awards, and three Grammys.

In addition to his work in music, Tim McGraw also launched an acting career in the late 1990’s which has grown steadily since. To date, he has appeared in a number of films, including: Friday Night Lights (2004), Flicka (2006), The Kingdom (2007), The Blind Side (2009), Country Strong (2010), and Dirty Girl (2010.) In addition, McGraw has also contributed to a number of charities, supporting such organizations as: the Neighbor’s Keeper Foundation, the American Red Cross, the Brett Favre Fourward Foundation, and the Community Foundation of Middle Tennessee.

Most recently, Tim McGraw released Two Lanes of Freedom in 2013. He continues to perform and tour, often alongside his wife, country music star Faith Hill.

For more information on booking Tim McGraw, please contact Booking Entertainment. One of our top booking agents will be happy to work on your behalf to get you the best possible price to book any big name entertainer for your upcoming public, private or corporate event worldwide.

Booking Entertainment works to get the best possible Tim McGraw booking fee and Tim McGraw price for our clients while also providing the celebrity or famous entertainer with the level of professionalism and industry norms that they expect from an event run by a professional booking agency and production management.

Booking Entertainment uses our agency / management relationships and over 25 years of production experience to help buyers of headline / top name entertainers and does not claim or represent itself as the exclusive Tim McGraw agent, manager or management company for any of the artists on our site.

Booking Entertainment does not claim or represent itself as the exclusive booking agency, business manager, publicist, speakers bureau or management for Tim McGraw or any artists or celebrities on this website.