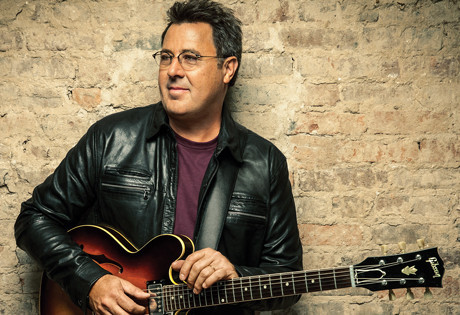 Start by filling out our no-obligation entertainment request form to check pricing and availability for Vince Gill or whoever else you may want.

Our Vince Gill agent will be happy to help you get Vince Gill's availability and booking fee, or the price and availability for any other A-List entertainer, band, comedian or celebrity you may want for your corporate event, private party, wedding, birthday party or public show.

Vince Gill was born in 1957 in Oklahoma, to a musically talented father who was already performing in his own country band when young Vince was born. With his encouragement, Gill learned to play guitar, banjo, and many other instruments and by the time he was in high school, he’d formed his first band. Following graduation, Vince Gill performed in a number of bands, before signing to his first record deal and releasing his debut album, Turn Me Loose, in 1984.

For his achievements in music, Vince Gill has been the recipient of numerous awards, including four Academy of Country Music Awards (including awards for Top Male Vocalist in 1984, 1992, and 1993); twelve country Music Association Awards (including multiple awards for Male Vocalist of the Year and Entertainer of the Year); and a staggering twenty Grammys from forty nominations, including awards for Best Country Vocal Song, Best Country Vocal Performance, and Best Country Album (for “These Days”) In total, Vince Gill has charted more than forty singles on the country charts and his album sales exceed twenty-two million. Gill received his star on the Hollywood Walk of Fame in 2012.

Most recently, Vince Gill began a tour focusing on bluegrass performances, and recorded “What You Need From Me” with Bonnie Tyler for her album Rocks and Honey (2013.)  He also collaborated with Kelly Clarkson and the Time Jumpers. Gill is planning for future country albums set to release soon.

For more information on booking Vince Gill, please contact Booking Entertainment. One of our top booking agents will be happy to work on your behalf to get you the best possible price to book any big name entertainer for your upcoming public, private or corporate event worldwide.

Booking Entertainment works to get the best possible Vince Gill booking fee and Vince Gill price for our clients while also providing the celebrity or famous entertainer with the level of professionalism and industry norms that they expect from an event run by a professional booking agency and production management.

Booking Entertainment uses our agency / management relationships and over 25 years of production experience to help buyers of headline / top name entertainers and does not claim or represent itself as the exclusive Vince Gill agent, manager or management company for any of the artists on our site.

Booking Entertainment does not claim or represent itself as the exclusive booking agency, business manager, publicist, speakers bureau or management for Vince Gill or any artists or celebrities on this website.