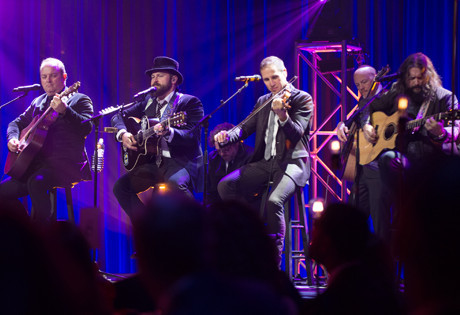 Start by filling out our no-obligation entertainment request form to check pricing and availability for Zac Brown Band or whoever else you may want.

Our Zac Brown Band agent will be happy to help you get Zac Brown Band's availability and booking fee, or the price and availability for any other A-List entertainer, band, comedian or celebrity you may want for your corporate event, private party, wedding, birthday party or public show.

The Zac Brown Band was created in 2002, although Zac Brown had been performing from the time he was a teenager, having earned to play classical guitar when he was only seven. By 2004, the Zac Brown Band was touring the country and playing at a variety of clubs and festivals, even though they had yet to sign to a label.

The Zac Brown Band self-released Far from Einstyne in the same year, and four years later signed to Live Nation Artists Records. The album The Foundation followed, and then two more: You Get What You Give (2010) and Uncaged (2012.) The albums spawned the hit singles: “Chicken Fried,” “Toes,” “Highway 20 Ride,” “Free,” “Colder Weather,” “Keep Me in Mind,” “As She’s Walking Away,” “Knee Deep,” “Goodbye in her Eyes,” and “No Hurry.” In total, even with only four albums released, the Zac Brown Band has landed nine number on singles on the country charts, and Billboard has named Uncaged as the best country album of the year for 2012.

In such a short period of time, the Zac Brown Band has been recognized with a staggering fifty-five award nominations so far, from the Country Music Association, American Music Awards, Academy of Country Music, and the Grammys, for categories ranging from Best Country Performance by a Duo or Group to Best New Artist. Most recently, the Zac Brown Band performed at the Stagecoach Festival as the headlining band in April of 2013, and one month later performed for three straight nights to sell out crowds at the Red Rocks Amphitheater in Colorado.

The Zac Brown band continues to perform, record, and tour, and is currently preparing for their next studio album release.

For more information on booking Zac Brown Band, please contact Booking Entertainment. One of our top booking agents will be happy to work on your behalf to get you the best possible price to book any big name entertainer for your upcoming public, private or corporate event worldwide.

Booking Entertainment works to get the best possible Zac Brown Band booking fee and Zac Brown Band price for our clients while also providing the celebrity or famous entertainer with the level of professionalism and industry norms that they expect from an event run by a professional booking agency and production management.

Booking Entertainment uses our agency / management relationships and over 25 years of production experience to help buyers of headline / top name entertainers and does not claim or represent itself as the exclusive Zac Brown Band agent, manager or management company for any of the artists on our site.

Booking Entertainment does not claim or represent itself as the exclusive booking agency, business manager, publicist, speakers bureau or management for Zac Brown Band or any artists or celebrities on this website.