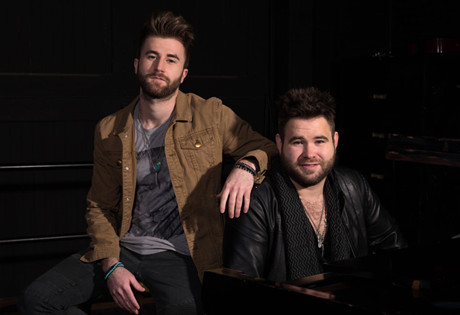 Start by filling out our no-obligation entertainment request form to check pricing and availability for The Swon Brothers or whoever else you may want.

Our The Swon Brothers agent will be happy to help you get The Swon Brothers's availability and booking fee, or the price and availability for any other A-List entertainer, band, comedian or celebrity you may want for your corporate event, private party, wedding, birthday party or public show.

The American country music duo known as The Swon Brothers rose to prominence in 2013 after they appeared on the television reality competition, The Voice. But long before their television debut, the brothers spent years performing and touring as children, often as part of of a Southern gospel group alongside their parents. By the time they were teenagers, both Colton and Zach Swon had learned to play a number of instruments and they began to gravitate towards more country and rock music.

The Swon Brothers finished their run on The Voice in third place, garnering the attention of Arista Records and signing with the label shortly after the show concluded. In the fall of 2013, the duo released the debut single, “Later On,” which rose into the top twenty on the Country Airplay charts and into the top forty on the Country charts. The song set the stage for the smash hit major label debut album, The Swon Brothers, which rose to the number six spot on the Country charts in the United States. The album spawned the additional single “Pray for You” and set the stage for The Swon Brothers’ career as rising stars on the country music scene.

Since that time, The Swon Brothers have released the EPs Timeless (2016) and Pretty Cool Scars (2017.) Clearly, The Swon Brothers are a country music act on the rise and one to watch in the coming years. The duo recently embarked on a summer tour for 2017, bringing them to venues throughout the country. In the fall, they are expected to return to the studio to prepare for their next studio album.

For more information on booking The Swon Brothers, please contact Booking Entertainment. One of our top booking agents will be happy to work on your behalf to get you the best possible price to book any big name entertainer for your upcoming public, private or corporate event worldwide.

Booking Entertainment works to get the best possible The Swon Brothers booking fee and The Swon Brothers price for our clients while also providing the celebrity or famous entertainer with the level of professionalism and industry norms that they expect from an event run by a professional booking agency and production management.

Booking Entertainment uses our agency / management relationships and over 25 years of production experience to help buyers of headline / top name entertainers and does not claim or represent itself as the exclusive The Swon Brothers agent, manager or management company for any of the artists on our site.

Booking Entertainment does not claim or represent itself as the exclusive booking agency, business manager, publicist, speakers bureau or management for The Swon Brothers or any artists or celebrities on this website.