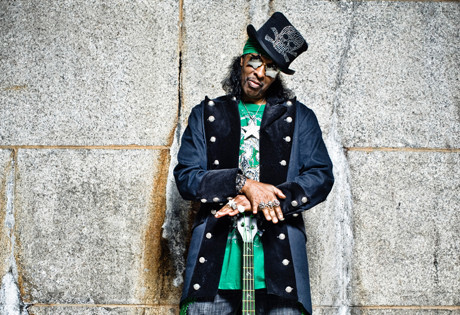 Start by filling out our no-obligation entertainment request form to check pricing and availability for Bootsy Collins or whoever else you may want.

Our Bootsy Collins agent will be happy to help you get Bootsy Collins's availability and booking fee, or the price and availability for any other A-List entertainer, band, comedian or celebrity you may want for your corporate event, private party, wedding, birthday party or public show.

Bootsy Collins was born William Earl Collins in 1951 in Ohio. In 1968, Bootsy formed his first funk band, The Pacemakers, with his brother. Two years later, James Brown hired the band as his official backup, renaming them The J.B.’s, which increased their exposure significantly. Although the J.B.’s only lasted a year, they provided music for some of Brown’s most memorable hits and launched Collins’s career as a musician.

After the breakup of the J.B.’s, Bootsy Collins reformed another band, but it was a fortuitous meeting in 1972 which led Bootsy to George Clinton, and his subsequent inclusion in both Funkadelic and later, Parliament, for which he served as the bass player. By the mid 1970’s, Bootsy had branched out to form Bootsy’s Rubber Band, alongside Robert Johnson and Mudbone Cooper. Bootsy’s album Bootsy? Player of the Year gave audiences the hit “Bootzilla” and brought the album to the top of the R&B charts in 1978.

After disappearing for much of the 1980’s, Collins returned with What’s Bootsy Doin’? in 1988, followed by a number of notable albums, including: Jungle Bass, Blasters of the Universe, Keepin’ Dah Funk Alive 4-1995, Play with Boosty, and Tha Funk Capital of the World. Since that time, Bootsy Collins has been recognized as a legend among R&B musicians, collaborating with dozens of notable performers on a variety of projects, including Bill Laswell ( Fatboy Slim), TobyMac, Nicole C. Mullens, and Buckethead, and fellow bass player Victor Wooten.

In addition to his own music projects, Bootsy Collins has founded the Funk University (Funk U), which provides students with opportunities to learn to play bass guitar through online and social media venues. Most recently, he contributed tracks for the film Superbad in 2007, participated in the Rock the Vote campaign of 2008, and received a Lifetime Achievement Award from Bass Player Magazine in 2010.

For more information on booking Bootsy Collins, please contact Booking Entertainment. One of our top booking agents will be happy to work on your behalf to get you the best possible price to book any big name entertainer for your upcoming public, private or corporate event worldwide.

Booking Entertainment works to get the best possible Bootsy Collins booking fee and Bootsy Collins price for our clients while also providing the celebrity or famous entertainer with the level of professionalism and industry norms that they expect from an event run by a professional booking agency and production management.

Booking Entertainment uses our agency / management relationships and over 25 years of production experience to help buyers of headline / top name entertainers and does not claim or represent itself as the exclusive Bootsy Collins agent, manager or management company for any of the artists on our site.

Booking Entertainment does not claim or represent itself as the exclusive booking agency, business manager, publicist, speakers bureau or management for Bootsy Collins or any artists or celebrities on this website.