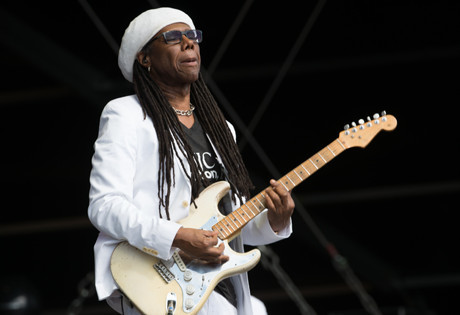 Start by filling out our no-obligation entertainment request form to check pricing and availability for Nile Rodgers & Chic or whoever else you may want.

“Le Freak” went on to sell more than six million copies and rose to the number one spot on the chart. The smash hit “Good Times,” from the album Risque, followed, establishing Chic as one of the most iconic R&B groups of the era. The additional albums Real People (1980), Take it Off (1981), Tongue in Chic (1982), Believer (1983), and Chic-Ism (1992) followed, although Chic was quiet for much of the new millennium until very recently.

Chic is credited with influencing the sound of the disco era immensely, and is frequently cited as an inspiration for a number of artists, including Duran Duran, The Smiths, and even Queen. Chic continues to perform and record with the current lineup of Nile Rodgers, Jerry Barnes, Ralph Rolle, Kimberly Davis, Folami, Richard Hilton, Russell Graham, Bill Holloman and Curt Ramm. The band recently released their latest album, It’s About Time (2018), featuring the single “Till the World Falls.” Their next album, Executive Realness, is expected to release in the coming year.

For more information on booking Nile Rodgers & Chic, please contact Booking Entertainment. One of our top booking agents will be happy to work on your behalf to get you the best possible price to book any big name entertainer for your upcoming public, private or corporate event worldwide.

Booking Entertainment works to get the best possible Nile Rodgers & Chic booking fee and Nile Rodgers & Chic price for our clients while also providing the celebrity or famous entertainer with the level of professionalism and industry norms that they expect from an event run by a professional booking agency and production management.

Booking Entertainment uses our agency / management relationships and over 25 years of production experience to help buyers of headline / top name entertainers and does not claim or represent itself as the exclusive Nile Rodgers & Chic agent, manager or management company for any of the artists on our site.

Booking Entertainment does not claim or represent itself as the exclusive booking agency, business manager, publicist, speakers bureau or management for Nile Rodgers & Chic or any artists or celebrities on this website.