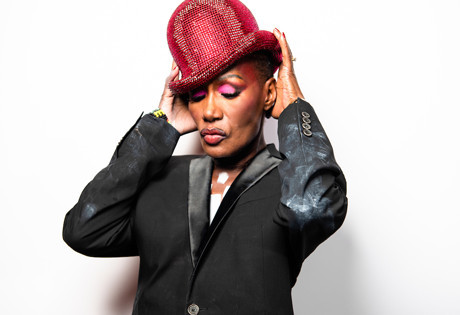 Start by filling out our no-obligation entertainment request form to check pricing and availability for Grace Jones or whoever else you may want.

Our Grace Jones agent will be happy to help you get Grace Jones 's availability and booking fee, or the price and availability for any other A-List entertainer, band, comedian or celebrity you may want for your corporate event, private party, wedding, birthday party or public show.

Grace Jones was born in Jamaica in the early 1950’s. Her family moved to New York when she was a child, and by the time she was a teenager, Grace had been singled out for a future modeling career. The Whilamina Modeling Agency in New York swept her up immediately, and the young Jones soon found herself traveling the world on modeling assignments. It was during one of these journeys to Europe in 1977 that a record company offered her the opportunity to record her first album.

Portfolio, Grace Jones’s debut, was released that same year, and while the album experienced moderate success, the single “I Need a Man” was an enormous hit in the early part of the decade. “La Vie en Rose” was equally successful, and by the end of the decade, Grace Jones was recognized as much for her music as for her modeling. Fame (1978) and Muse (1979) came next, but it was her 1980 release, Warm Leatherette, that brought her more genuine and authentic recognition as an artist.

Grace Jones’s androgynous appearance began to transcend her modeling and music reputation, and by the 1980’s, Jones was accepting film roles as well. Her appearances in Conan the Destroyer and Vamp brought her to the forefront of the movie industry, even though she continued with album releases for the rest of the decade: Nightclubbing (1981), Living My Life (1982), Slave to the Rhythm (1985), Inside Story (1986), and Bulletproof Heart (1989.) In the early 1990’s, Grace’s single “Sex Drive” became a number one on the dance charts, and she spent much of the decade recording music for soundtracks, including the singles “Evilmania” (for the film Freddy the Frog) and “Let Joy and Innocence Prevail” (for the film Toys.)

Since the start of the new millennium, Grace Jones has continued her work in film, modeling, and music, including providing the song “Storm” for the soundtrack to the Avengers and serving as a runway model for Diesel’s New York show in 2006. The Hurricane, Grace’s 2008 album, was followed by an extensive concert tour and a performance at the Royal Albert Hall in 2010.  Grace Jones continues to perform, record, and model, with no signs of slowing down. Most recently, in 2012, she performed at Queen Elizabeth II’s Diamond jubilee, and in October she performed at the Roseland Ballroom in New York to a sell-out crowd.

For more information on booking Grace Jones , please contact Booking Entertainment. One of our top booking agents will be happy to work on your behalf to get you the best possible price to book any big name entertainer for your upcoming public, private or corporate event worldwide.

Booking Entertainment works to get the best possible Grace Jones booking fee and Grace Jones price for our clients while also providing the celebrity or famous entertainer with the level of professionalism and industry norms that they expect from an event run by a professional booking agency and production management.

Booking Entertainment uses our agency / management relationships and over 25 years of production experience to help buyers of headline / top name entertainers and does not claim or represent itself as the exclusive Grace Jones agent, manager or management company for any of the artists on our site.

Booking Entertainment does not claim or represent itself as the exclusive booking agency, business manager, publicist, speakers bureau or management for Grace Jones or any artists or celebrities on this website.