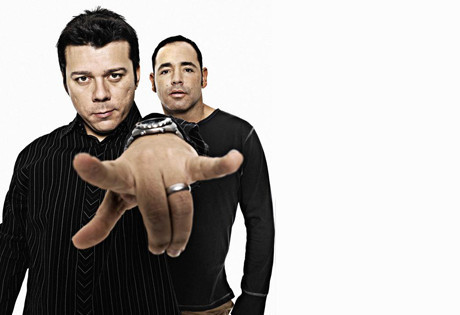 Start by filling out our no-obligation entertainment request form to check pricing and availability for Crystal Method or whoever else you may want.

Our Crystal Method agent will be happy to help you get Crystal Method's availability and booking fee, or the price and availability for any other A-List entertainer, band, comedian or celebrity you may want for your corporate event, private party, wedding, birthday party or public show.

The electronic music duo Crystal Method was established in Las Vegas in the 1990’s by musicians Scott Kirkland and Ken Jordan. After signing to Outpost Recordings in 1996, Jordan and Kirkland began work on Crystal Method’s smash-hit album, Vegas, which was released in 1997. The album featured the songs “Keep Hope Alive,” “Comin’ Back,” “High Roller,” “Busy Child,” and “Trip Like I Do,” and eventually rose to platinum status, nearly a decade after its release.

Before Vegas’s successful re-release in 2007, however, Crystal Method spent much of the later 1990’s and earlier 2000’s releasing a series of albums, including Tweekend (2001), Community Service (2002), Legion of Boom (2004), and Community Service II (2005.) Crystal Method’s earliest critical acclaim came with Legion of Boom, which garnered the duo a Grammy nomination for Best Electronic/Dance Album in 2005. The success of the album bolstered Crystal Method’s subsequent projects, and Kirkland and Jordan formed Tiny e Recordings and composed the theme to the hit television series Bones.

Shortly thereafter, Crystal Method provided the score to the film London, in addition to the singles “Glass Breaker” and “Smoked,” both of which also appear on the soundtrack. The success of the album led Crystal Method to the attention of the corporation Nike, which offered the duo a deal to provide music specifically geared towards the runner, with appropriate tempos to match various running paces. The result was Drive: Nike + Original Run, and the album rose to the top of the charts, bringing Crystal Method to greater worldwide attention, and spawning the re-release of Vegas in 2007.

Since then, Crystal Method has provided numerous tracks for a variety of media outlets, most notably for video games and video game trailers. The duo’s most recent release, The Crystal Method, arrived in 2014.

For more information on booking Crystal Method, please contact Booking Entertainment. One of our top booking agents will be happy to work on your behalf to get you the best possible price to book any big name entertainer for your upcoming public, private or corporate event worldwide.

Booking Entertainment works to get the best possible Crystal Method booking fee and Crystal Method price for our clients while also providing the celebrity or famous entertainer with the level of professionalism and industry norms that they expect from an event run by a professional booking agency and production management.

Booking Entertainment uses our agency / management relationships and over 25 years of production experience to help buyers of headline / top name entertainers and does not claim or represent itself as the exclusive Crystal Method agent, manager or management company for any of the artists on our site.

Booking Entertainment does not claim or represent itself as the exclusive booking agency, business manager, publicist, speakers bureau or management for Crystal Method or any artists or celebrities on this website.