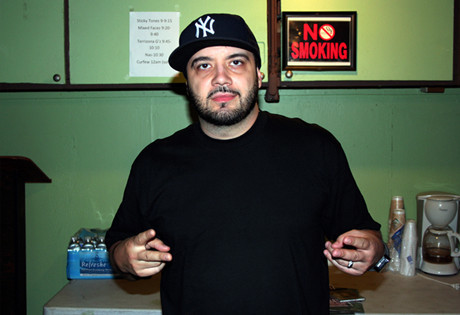 Start by filling out our no-obligation entertainment request form to check pricing and availability for DJ Green Lantern or whoever else you may want.

Our DJ Green Lantern agent will be happy to help you get DJ Green Lantern's availability and booking fee, or the price and availability for any other A-List entertainer, band, comedian or celebrity you may want for your corporate event, private party, wedding, birthday party or public show.

DJ Green Lantern was born James D’Agostino in 1975 in Rochester, New York. Green Lantern rose to fame in the early 2000’s, after his talents were discovered by Eminem, who signed the artist to become his official DJ for Shady Records. Although DJ Green Lantern left the label a few years later, his work with Eminem and Shady Records helped to firmly establish him as a DJ artist and served as his early breakthrough.

DJ Green Lantern recorded Shady Record’s first officially sponsored mixtapes, beginning with his debut release, Invasion. A series of three mixtapes eventually turned into what is now known as the Armageddon series, and launched DJ Green Lantern as not only a DJ artist, but also as a producer. Some notable examples from Green Lantern’s work include: “Thugz Mansion” (a remix of the Tupac Shakur collaboration with Nas); “2 Guns Up” (produced for D-Block); and “Number One Spot” (recorded by Ludacris.)

While with Eminem, DJ Green Lantern also hosted Eminem’s channel on Sirius Radio, and to this day he continues to appear on Sirius, now serving as the host for Hip-Hop Nation.  DJ Green Lantern’s contributions and album releases are too numerous to list in full, but notable works include: New York State of Mind (2006), Hood Rules Apply (2007), Invade the Game (2012), and the soundtrack for Grand Theft Auto IV: Liberty City Invasion, released in 2008. His collaborations include works with such notable artists as: Cassidy, Nas, Wiz Khalifa, Uncle Murda, Ghostface Killah, Keyshia Cole, Dame Dash, Young Gunz, and Styles P.

DJ Green Lantern continues to produce, host, and record his own work and in collaboration with others.

For more information on booking DJ Green Lantern, please contact Booking Entertainment. One of our top booking agents will be happy to work on your behalf to get you the best possible price to book any big name entertainer for your upcoming public, private or corporate event worldwide.

Booking Entertainment works to get the best possible DJ Green Lantern booking fee and DJ Green Lantern price for our clients while also providing the celebrity or famous entertainer with the level of professionalism and industry norms that they expect from an event run by a professional booking agency and production management.

Booking Entertainment uses our agency / management relationships and over 25 years of production experience to help buyers of headline / top name entertainers and does not claim or represent itself as the exclusive DJ Green Lantern agent, manager or management company for any of the artists on our site.

Booking Entertainment does not claim or represent itself as the exclusive booking agency, business manager, publicist, speakers bureau or management for DJ Green Lantern or any artists or celebrities on this website.