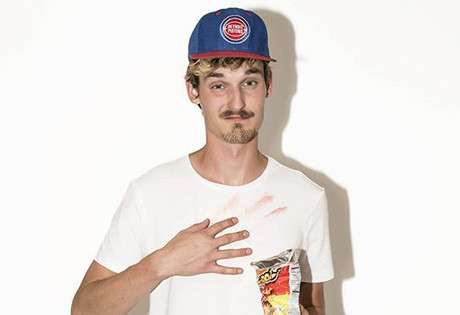 Start by filling out our no-obligation entertainment request form to check pricing and availability for GRiZ or whoever else you may want.

Wondering how to book GRiZ for your event? Let Booking Entertainment be Your entertainment booking agency for booking GRiZ for events worldwide.

Our GRiZ agent will be happy to help you get GRiZ's availability and booking fee, or the price and availability for any other A-List entertainer, band, comedian or celebrity you may want for your corporate event, private party, wedding, birthday party or public show.

GRiZ, also known as Grant Kwiecinski, is an aspiring, young DJ from Southfield, Michigan. Coming from a small town, “GRiZ”, learned how to play the piano and the alto saxophone at a young age. Today, GRiZ is only twenty-six and he is already known for his unique talent with the saxophone as well as his ability to produce his own music. After attending Michigan State University, performing at local parties and listening to numerous funk groups, GRiZ dropped of college out to pursue his music career.

Following his college years, GRiZ kept his growing passion for music and EDM strong by releasing his first album in 2011. In 2012, he released his second album, Mad Liberation. GRiZ’s third album was released in 2013 called Rebel Era. GRiZ’s album, End of The World Party, released in 2011, supported many big-time artists and helped to lead him to his first-ever headlining tour in 2013. Following a successful first tour, GRiZ was able to record, produce and release numerous other albums in three short year’s time. In 2015, he worked with other experienced DJ’s to create his fourth album, Say It Loud. Produced this year, his fifth and most recent album is called Good Will Prevail. GRiZ brings a whole new outlook on EDM music with his soul, funk and jazz perspective.

Muzzy Bearr, the guitarist that performs and collaborates with GRiZ on many songs, is also a contemporary helping to promote his music even more. GRiZ records his music through All Good Records, a large record company based out of Detroit, Michigan. Through these opportunities GRiZ has certainly gained a name for himself, hoping to grow bigger and better with every year to come.

GRiZ has performed at large music festivals such as Cochella, Electric Forest, Tomorrowland, Lollapalooza and many more. His ability to write and produce his own music puts him ahead of his competitors. GRiZ works religiously by the mantra “Show Love, Spread Love.” To him, this helps to connect his music with the people who support him through pictures and other intangible objects.

GRiZ originally formed his passion for music from the reaction he received from the small audiences he performed for back in college. Today, his audiences are loyal, highly energetic teens that continue to support GRiZ throughout his startup years. These teens are grouped together to form the ‘GRiZFam.’ With every year more fans join the group, making a larger name for GRiZ in the music world.

Another popular event GRiZ originated was the ’12 Days of GRiZmas’, an event organized every year to raise money for non-profit charity organizations. Due to all of his great contributions in such a short amount of time, GRiZ had already become the “#1 Breakout Artist of 2013.’ After raising over $30,000 for Little Kids Rock, GRiZ agreed to hold benefit concerts in less fortunate cities in the hopes of spreading holiday cheer. His kind acts in today’s society and extreme talent in the music industry are what makes GRiZ so successful and will help to grow his success in the years to come.

For more information on booking GRiZ, please contact Booking Entertainment. One of our top booking agents will be happy to work on your behalf to get you the best possible price to book any big name entertainer for your upcoming public, private or corporate event worldwide.

Booking Entertainment works to get the best possible GRiZ booking fee and GRiZ price for our clients while also providing the celebrity or famous entertainer with the level of professionalism and industry norms that they expect from an event run by a professional booking agency and production management.

Booking Entertainment uses our agency / management relationships and over 25 years of production experience to help buyers of headline / top name entertainers and does not claim or represent itself as the exclusive GRiZ agent, manager or management company for any of the artists on our site.

Booking Entertainment does not claim or represent itself as the exclusive booking agency, business manager, publicist, speakers bureau or management for GRiZ or any artists or celebrities on this website.