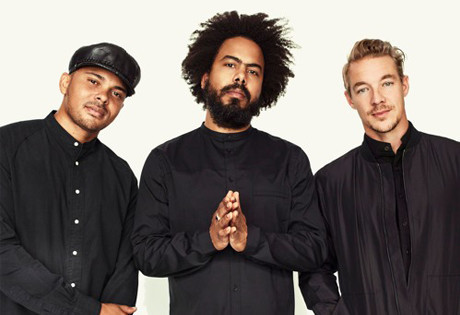 Start by filling out our no-obligation entertainment request form to check pricing and availability for Major Lazer or whoever else you may want.

Our Major Lazer agent will be happy to help you get Major Lazer's availability and booking fee, or the price and availability for any other A-List entertainer, band, comedian or celebrity you may want for your corporate event, private party, wedding, birthday party or public show.

The electronic music group known as Major Lazer was established by original founding members and producers Switch and Diplo in the late 2000’s. The duo met while working with the group M.I.A. in 2008, and recorded their first album, Guns Don’t Kill People… Lazers Do, shortly thereafter. The album, which was crafted at Tuff Gong Studios in Jamaica, featured contributions from such heavy-hitters as Mapei, Ward 21, Mr. Vegas, Nina Sky, Turbulence, and Santigold.

Guns Don’t Kill People… Lazers Do featured the singles “Hold the Line” (featuring Santigold); “Pon de Floor” (featuring Afrokjack); “Keep It Goin’ Louder” (featuring Nina Sky); and “Jump Up” (featuring Supahype and Leftside.) Since their debut, Major Lazer has also released the additional albums Free the Universe (2013) and Peace Is the Mission (2015), giving audiences the additional singles “Get Free,” “Jah No Partial,” “Watch Out for This,” and “Bubble Butt,” which features Bruno Mars and Tyga and rose into the top forty on a number of different charts. Major Lazer has also collaborated with Pharrell Williams on the single “Aerosol Can” and DJ Snake on the duo’s single “Lean On,” which was a number one hit.

Although Switch left Major Lazer ins 2011, Diplo moved forward with the addition of members Walshy Fire and Jillionaire. Major Lazer is currently preparing for the release of their next album, Music Is the Weapon, scheduled to arrive in 2016.

For more information on booking Major Lazer, please contact Booking Entertainment. One of our top booking agents will be happy to work on your behalf to get you the best possible price to book any big name entertainer for your upcoming public, private or corporate event worldwide.

Booking Entertainment works to get the best possible Major Lazer booking fee and Major Lazer price for our clients while also providing the celebrity or famous entertainer with the level of professionalism and industry norms that they expect from an event run by a professional booking agency and production management.

Booking Entertainment uses our agency / management relationships and over 25 years of production experience to help buyers of headline / top name entertainers and does not claim or represent itself as the exclusive Major Lazer agent, manager or management company for any of the artists on our site.

Booking Entertainment does not claim or represent itself as the exclusive booking agency, business manager, publicist, speakers bureau or management for Major Lazer or any artists or celebrities on this website.